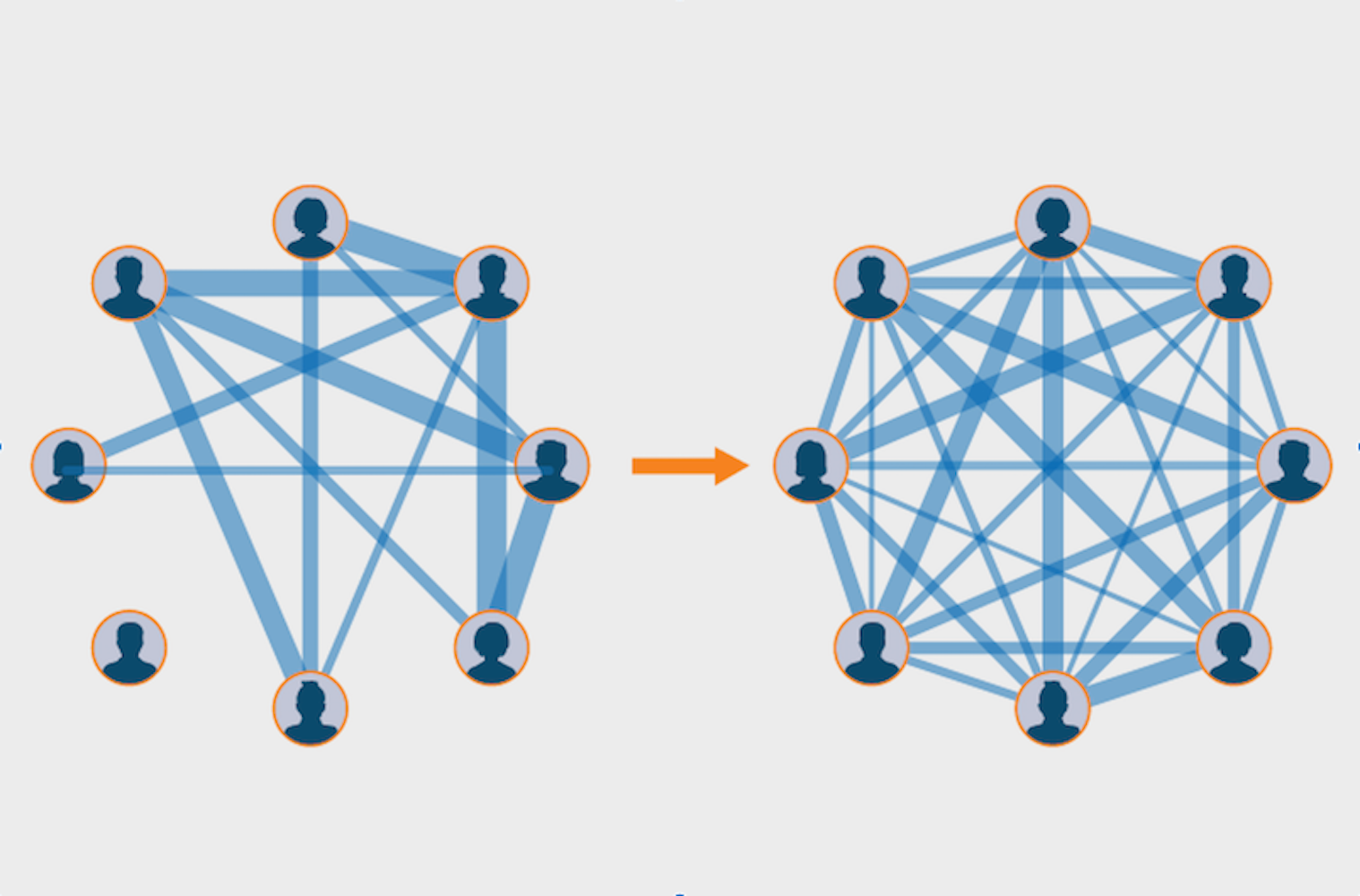 By Nick Osborne and originally published at evolvingorganisation blog.

This is an abridged version of a series of 10 longer articles available as a free preview of part of this online course.

We all know that living systems depend on feedback to survive and thrive; and organisations are no exception. And the lack of such feedback leads to poor organisation health, even organisations working towards Teal.

So much essential information is lost when people don’t say what they really think and feel, especially to power-holders; typically because of not feeling safe enough to take the risks. This is often the most valuable type of feedback; without which the people, organisation and purpose all suffer.

Maybe you need to make a decision that you are newly empowered to make, but is against the advice of your former boss who still can decide your salary or whether to fire you. Or you think it would help to illuminate a blind spot of the company founder that you see as consistently causing harm. Or question what a colleague has done where they are holding power without accountability.

It can be confusing if we are encouraged to bring our whole selves to the workplace; but if the shift in power needed for self-organisation to work isn’t truly happening, then it may feel too risky to fully show up.

Whether this power shift happens through a decentralised decision-making process like the Advice Process, or a distributed authority system like Holacracy® or some other self-organisation practice, I suggest that psychological safety and trust are essential prerequisites for power to truly shift.

And at the same time, I also suggest that the power shift creates the conditions for psychological safety and trust to emerge in the matrix of interpersonal relationships. So that people can show up in their wholeness and feel confident to take the risks of speaking truth to power without fearing negative consequences. This article explains how we can unravel this Gordian knot.

I believe there’s no quick way to achieve this elixir of high-performing teams: psychological safety and trust, even and perhaps especially, in the transition to Teal. It needs a powerful methodology which can work at depth, like Matrix Leadership.

But for this to work, I’ve learned from my experience of over 25 years of self-organising that at least 4 obstacles to the power shift need to be overcome. These are described in 7 stages of a journey to mature self-organisation below. This is one sequence these stages can take in one story of this journey; I don’t think it’s necessary for them to always happen in this order.

Psychological safety in the workplace

I’m defining this as feeling safe enough to take risks without fear of negative consequences. This can look like experimenting, making mistakes, disagreeing, giving challenging feedback and showing up creatively in my work. In professional relationships, it can look like being honest and vulnerable; showing up fully in my wholeness.

People can feel unsafe when those with power lack accountability or when power is held informally; if concerns about work or about colleagues are ignored or silenced; or if one’s pay, job security, or right to challenge or disagree are influenced by the opinions of a person in power.

This all relates to ‘speaking truth to power’; to what extent do you feel safe to speak your truth to power in your organisation? What’s in the way of your doing that? What’s lost when you remain silent?

Psychological safety in the power shift

The power shift required on the way to a Teal Organisation is the shift:

This power shift requires people who previously held less power sometimes needing to question/challenge those who previously held more. It can be hard to tell a former boss, “thanks for your input, I’ll consider that and let you know what I decide.” Someone must feel safe enough to trust that there won’t be negative consequences for taking the kind of stance that true, power-shifted self-organisation requires.

This power shift happens, to varying degrees, through adopting the Advice Process, or a self-organising system like Holacracy, Sociocracy or S3, or in some custom approaches (explained more in these online courses on self-organisation). Read more on how psychological safety, power shift, self-organisation and Teal fit together…

I suggest the 7 stages below are relevant to any of these approaches to self-organisation and seeking to truly realise the potential of Teal.

How psychological safety & trust deepens through 7 stages of self-organisation

We’ve left the old hierarchy behind and things are less structured now; we are more collaborative and generally agree things as we go along. But some people still talk more than others and are still kind of in charge. And lots of things are not clear; there’s no accountability and we don’t talk about that or how things are working. We need to be clearer about who can do and decide what. Read full article about this stage…

Stage 2: Clarifying who does what

We’ve started self-organising and have ways to make it clear how decisions are made and who is doing what. But I have issues with some people and don’t know how to sort them out, because everything seems to be just about work. We need to find ways to have difficult conversations to sort out interpersonal issues and also what’s going on in the team as a whole, but those ways don’t exist. Read full article about this stage…

We now have this idea of ‘Tribe Space’ where we just talk and do stuff together when we know we aren’t in our work roles. And we have these relational processes (or ‘Tribe Space Apps’) which are supposed to help us have the difficult conversations and clear the air in the team.

But I still don’t feel like I can do that. Partly because some of it is about how the founders/former managers do things, and they still decide about salaries and firing people. So I don’t feel like I can question or challenge them about any of the difficult stuff. Also, partly because these relational processes aren’t really working. Read full article about this stage…

Things have shifted so that decisions about salaries and firing people are now made by people who are elected using a clear and fair voting process, or some other more distributed process like that.

But there’s still no way to have the difficult conversations with other people and about what’s going on in the team. Even though there’s this clear structure with roles, there’s still some people who are kind of in charge in other ways. They talk more, and their views are given more weight.

It’s as if they have this kind of informal/shadow power, that is different from the formal authority they have in their roles. It’s a taboo topic, so we can’t talk about it and these relational processes aren’t helping us to either have the difficult conversations 1-1 at a team level about the group dynamics. Read full article about this stage…

It’s only once those 4 obstacles are removed in the previous stages, that the real work starts of implementing social processes that challenge shadow power and invite trust, safety, and depth in interpersonal relationships.

In my 25+ years of experience of self-organising, the best method that I have come across for this is the Matrix Leadership Framework which can work at depth to create a ‘Ground of Health’ in our matrix of interpersonal relationships, like a healthy fertile soil, from which things like psychological safety and trust can grow.

This enables the difficult conversations to finally happen; both 1-1 and also about the taboo topics, power issues, cultural biases, etc., that we haven’t been able to talk about in the team. This also liberates creative leadership and collective intelligence in groups.

The obstacle at this stage is the need to differentiate between these different types of tensions and have clear pathways to process them differently; but neither the organisation or people have this capacity. And definitely both are needed. Read full article about this stage…

This need invites the formal clarification between two different types of space in our organisational structure, where different sets of rules apply:

These two contexts exist inside a broader Enterprise Context which can integrate both sets of needs in service of the organisational purpose. This approach is being pioneered by Evolution at Work in the new Symbiotic Enterprise model, and is supported by personal development programs such as the Language of Spaces and Love, Power and Purpose. This makes it easier to sort out the relational and work issues separately without being tangled up with each other, and for any tensions in the People/Org relations to be processed in the Enterprise Context without the danger of one set of needs co-opting the other.

The last remaining obstacle to mature, fully power shifted self-organisation structure and practice is any special privileges that any people hold by virtue of company ownership, equity, or other assets. Read full article about this stage…

We can deepen this next layer of psychological safety by formally encoding the distinction between:

Here, perspectives from all three sets of interests can be worked with from the basis of a clear legal differentiation. This approach is being pioneered by encode.org with the For Purpose Enterprise.

This creates the conditions for the organisational purpose to be more liberated to evolve, with minimal interference from the limitations of our lack of psychological safety. Read full article about this stage…

An Opportunity with Matrix Leadership

I took the Matrix Leadership Essentials for Professionals course in Boulder, Colorado, in January 2019. I was so deeply impressed by how it builds a strong relational infrastructure in the matrix of interpersonal relationships in a group, and the impacts that has, that I decided to bring this workshop to the UK for the first time.

I believe it is sorely needed to address gaps and failures in organisations struggling to transition to Teal ways of working.

I’ve invited Amina Knowlan, co-creator and Trainer of the framework, to come to London to co-deliver the 4-day Matrix Essentials workshop from April 2nd to 5th, 2020. This is the first (and perhaps only) such workshop being offered in Western Europe.

If you are involved in self-organisation, I hope to see you there. I am convinced of this work’s value and am investing my personal time and energy into hosting this workshop!

Book your place in the In-Person Matrix Leadership workshop.

Sign up for the online Deepening Psychological Safety in Stages of Self-Organisation course. Nick Osborne is distilling his learning from over 25 years of self-organising onto a Learning Platform for Self-Organisation where he offers online and in-person training and coaching He was the first Certified Holacracy Coach in the UK and is a partner at HolacracyOne and Evolution at Work. [email protected] .

Enlivening Edge is happy to be an affiliate partner of this training.