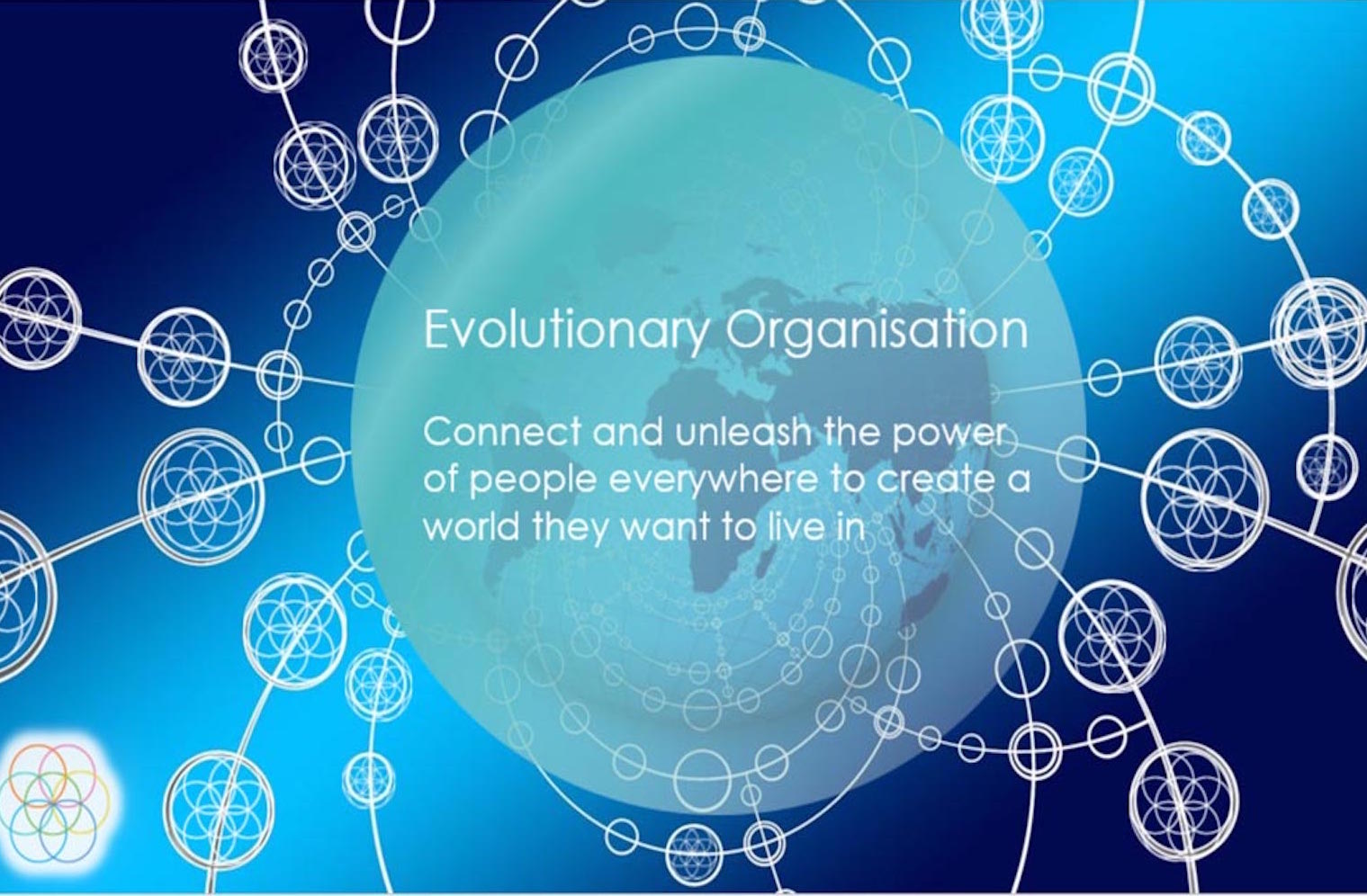 Summary of her longer article, by Morya Short for Enlivening Edge Magazine

In 2017, the Global Challenge Foundation kicked off the “New Shape Prize.” Their aim was to gather innovative ideas about re-inventing global governance and transforming the United Nations. They received 2700 submissions, which a series of panels whittled down to 14 finalists.

The proposal outlined below was one of the 14 finalists and is reproduced here because a key feature of the proposal is self-organisation. Is this perhaps a sign that the world is ready to experiment more widely with self-organisation? Personally, I would say “YES.”  For me this is just one more sign of its emergence as part of our social evolution. The question now is how do we speed up the inevitable?

This proposal outlines an open adaptive system model (evolutionary organisation – EO) created in addition to the UN’s current structure. The power in the system is used to define what to do and how to do it, and is held by self-organised local people solving local issues in a way that also addresses global goals and creates a better world for everyone. The processes, technology, and training support combine to create a framework for action that is flexible, self-organising, and responsive, and that taps into the collective genius via global mass collaboration.

Components of the System

Anyone who wants to become a participant of the UN-EO.

Responsible for: completing training and complying with agreements.

Responsible for: keeping top level documentation updated in response to changes and assessing the first LAC in the world, Incubators, KCs.

This would be a group of UN citizens formed to address a local need or opportunity who undertake the circle training. Any UN citizens who see a need in their community can form an action circle with others. An LAC may be part of an existing charity or organisation. Once the circle is formed and the members have agreed and documented the processes, the circle is assessed by a non-local LAC or by outer circle, if it is the first LAC in the world. If all processes are in line with the values and principles of the EO, the circle is verified on the portal and can make a project proposal. Non-local refers to another group that is disinterested and from another area, which is close enough to allow them to effectively assess the processes, proposals and projects of the circle they are assessing.

Local groups with specific expertise who have participated in circle training, may be part of an existing school or university.

Responsible for: providing data and insights on request to LACs and other KCs. Also required to assess non-local KCs.

Provide citizens, LACs, and KCs with training, set-up resources, and support. Incubators would be set up in agreement with local governments and with a non-local existing incubator and funded by the UN.

Responsible for: providing training and assessing other incubators.

Responsible for: providing medium of exchange and recognition.

An internet portal to connect all parts of the system, manage processes, circles, funding rules and activities, including cryptocurrency distribution and exchange.

Responsible for: creating openness, transparency and efficiency, and reducing bias.

Funding, either from the UN central funding, UN citizens, crowdfunding, charities, or foundations, is part of the “energy” that powers the system. To get funding, the project proposals are created in a framework and added to the portal. The decision to fund from UN resources is made in funding rounds, based on the criteria, assessed by other LACs, UN bodies, and UN citizens. Proposal submission and voting is done anonymously so that bias is avoided, although the country/region where the proposal or vote comes from is recorded to avoid all UN resources going to countries that could fund their own projects. The system is open to funding from non-UN sources.

Decision Making in a Circle

The systems processes and criteria are the main source of control. Assessments and evaluation of processes and projects are done by non-local circles so that bias and corruption are minimised. The portal also provides control mechanisms based on the funding and proposal rules built into the system. Each LAC must have representatives from specific age, gender, and minority groups, in order to reduce domination by self-interested groups. Components or individuals that do not meet the criteria to engage do not gain resources or opportunities from the system, so eventually leave. Those who actively try to undermine the system are removed from the portal.

Core Attributes of an EO

1. Develop the ability of participants to build on their strengths and personal motivation to create a better life.

2. Embed control mechanisms into the organisational processes and technology. Rules are enforced by all participants, not “policed” by leaders.

3. Technology used to create openness, transparency, global connections, continuous learning, and enliven values and vision for a better world for everyone.

4. Action on global issues taken by small self-organised circles that are funded by the UN, or other funders, to tackle local issues in ways that reduce global risks.

6. UN cryptocurrency that part-funds projects, keeping “energy” inside the system.

7. Self-organisation used to maximise understanding, adaptability, and flexibility, which reduces “management resistance” and frees up time and energy as a result.

8. The design of LACs and principles upon which their processes are built, which fosters inclusive decision-making.

You can read the detail of the proposal here https://globalchallenges.org/new-shape-library/59ad9e6914145b4f970f8e5f/details

Morya Short supports managers and teams to experience greater success, creativity, and engagement. She has over 20 years’ experience working in small business and in multi-national corporations. She is the creator of the “Thriving Programmes,” which combine workshops and hybrid coaching to transform businesses, managers and teams. She is the founder of POSE and co-creator of Leader Circles. She is currently researching next-generation organisational models, such as the Teal model, with a view to integrating best practices into the Team Thriving Programme. POSE  Linkedin  Twitter  Meet Me