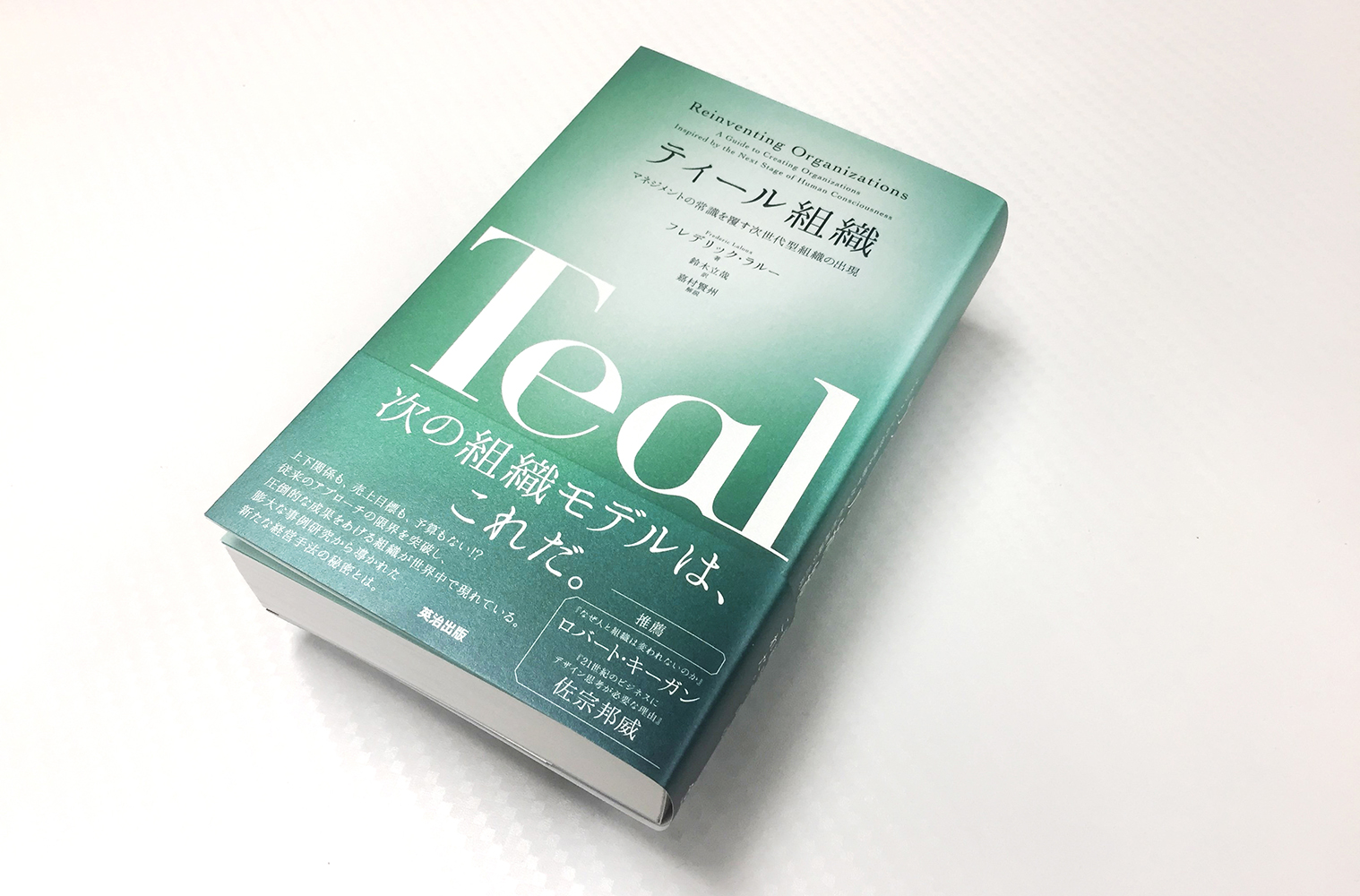 The Japanese version of Reinventing Organizations was published in January 2018 and gained tremendous response, in various ways. So far over 80,000 copies were sold including e-books. The Japanese version of the book has received three big awards: “Business Book Awards 2019 — CEO Award,” “Business Book Grand-Prix — Management Department,” “HR Awards 2018 — First Place.” Frederic Lalouxtold us that these are the first book prizes his book has received in any country.

I got involved in the publishing a little bit coincidentally and I never imagined the book would be sold so quickly. But when I reflected what happened after publishing, I began to realize there might be some useful insights for other countries, so I would like to share my thoughts about why this book has become a movement.

Why did we publish?

The trigger was a proposal from the translator Mr. Tatsuya Suzuki. An editor in another publishing company asked Mr. Suzuki to create a summary. When the editor proposed the book to his company, it was declined. So the editor recommended Mr. Suzuki to access us, Eiji Press.

Frankly I think none of us at the initial “idea meeting” thought “This book will sell very well.” Rather, everyone thought “Nobody knows about Teal organizations in Japan, and who on earth would pick up a book of such volume?” (This assumption continued until just before pre-ordering started).

Despite those doubts, I believed that there was much more potential in this book for selling in the long term. There were three reasons.

In Japan more and more people are feeling doubts about “the traditional way of organizations.” For example, many organizations have been accused as “Evil Corporation” for exploiting their employees. The book provides why there are limits in the traditional hierarchical structure, and presents a new paradigm that has been born with completely new methodologies.

The book is based on actual examples, not an armchair theory. I thought that the diversity of cases would make readers feel “We might be able to try it.”

“Work for purpose, not for sales.” “No hierarchy and no budget, all decisions are done by everyone.” “No HR department, and evaluations and salaries are determined by each employee,” etc. Such organizations seem unrealistic, but we cannot stop being attracted

In the idea meeting, we seriously discussed “What can we do to reach our target readers”? We thought there might be an opportunity because this book has similar ideas to the books we had published so far, such as the The Learning Organization by Peter M. Senge, Theory U by C. Otto Scharmer, or books with concepts like “Dialogue” and “Mindfulness”, etc. So we thought that this book will continue to sell in the long run like these books. Then, everyone agreed, and the proposal went through.

It was “the power of the community” that made the hit

It actually took two and a half years to edit and produce the Japanese translation of Reinventing Organizations after the first idea meeting. Although it took much longer than our standard project, I think publication at this timing was the best, as a result. There are two reasons.

First, the “grass-roots community,” gradually grown thanks to Mr. Kenshu Kamura (afterward contributor) and his friends, played a major role in introducing the book to Japan. Coincidentally, Mr. Kamura and we came to know the book separately almost at the same time as each other. He then launched “OrgLab (Organization Laboratory)” with those who were interested in new types of organizations.

Over two years they have connected with practitioners around the world, inviting them to Japan to provide learning opportunities. Then more and more began to join the OrgLab community.

Secondly, working style has been changing dramatically in Japan. “Evil Company” became a big issue when suicides from being overworked increased. On the other hand, many people started to choose alternative working styles such as remote work and side jobs. Then “work style reform” became a major goal in both politics and economics.

However, simply reducing working hours and encouraging alternative working styles might not change the system profoundly. Many problems remain, such as excessive burden on managers, and evaluation and reward of employees. “Aren’t there essential solutions in other ways?” I think more and more people were feeling like this.

So, I believe that this mix of bottom-up movements (OrgLab grassroot community) and social trends (workstyle reform) supported the book becoming a best-seller in Japan.

What I really felt was “the power of the community”. As I mentioned earlier, we never imagined a big hit; rather, we thought that it would gradually spread to those who interested in this topic.

However, that expectation was overturned in a good way immediately after we started pre-orders for the book. As soon as Kenshu and his friends announced about publishing, the information created a snowball effect.

In addition, although the original title of this book is Reinventing Organizations, we put another name of Teal Organizations for the Japanese version. This simple phrase became a keyword. And the color of the cover in Teal (blue-green) was rare as a business book; it pulled the readers’ attention. Designer Mr. Yuji Takeuchi, visualized my initial cover idea brilliantly. Following the explosive sales at the end of the year, we at Eiji Press held an emergency meeting at the beginning of the next year, and determined some marketing plans about reprinting, event, advertisements and media promotion.

In addition, we also decided on some unique challenges: to produce a “Book Club Guide” and to provide free “Galleys for ABD.” “ABD = Active Book Dialogue” is an epoch-making workshop method developed by Mr. Sotaro Takenochi, a Japanese business leader and a facilitator. In ABD, a group of people to come together, read a book in parts, share insights and inspirations, and have a conversation about what it means. You can download a free manual from the official site.

During the 2017 year-end and the New Year holidays of 2018, when the publication announcement spread, already four or five book clubs were planned in various places in Japan, as far as I know, most of them ABD workshops. ABD is effective when almost all members have not yet read and want to grasp the whole picture of the book. Indeed, it was one of the perfect approaches for reading a large volume such as these 600 pages.

Mr. Kamura is one of the passionate evangelists of the method. He and his friends had already held many ABD workshops for almost one year.

We Eiji Press felt that ABD would be very useful for Reinventing Organizations, so we held a ABD workshop three months before the publication with facilitation by Mr. Kamura.

What I felt great about the method is that each one could feel like “I could read one whole book” using collective power, thus it fosters our attachment towards the book itself. ABD creates various values in a short time.

So we decided to support this ABD movement. Usually people literally split one book into parts for each participant. It’s a little bit sad for the publisher, and we started a campaign to provide the full galley for free.

In addition, Mr. Kamura and I created a “Book Club Guide (※ PDF)” to accelerate the movement. When we announced it on our Facebook page on March 1, there was much more response than we expected. So far there have been 2500+ downloads of the Book Club Guide and we provided free galleys to 130+ places.

This voluntary movement of Reinventing Organizations continues to spread throughout Japan. So in Japanese context, we could say that the book not only broadened our horizons in the field of organization theories, but also created a new way of readers’ community. mu Shimoda is Producer, Eiji Press, Inc. He has produced many books about Social Change, Poverty Reduction, Peace Building, Organizational Development, Education, etc. His key question is “How can we create a new way of activities or organizations to encourage people to make a better society?”

He now works in various fields around “Teal Movement” or evolution of organizations in Japan. One of the projects was a one-day conference called “Teal Journey Campus” held in Sept 2019 hosting Frederic Laloux and other practitioners. With over 500 participants, the movement in Japan is moving to the next stage.

He enjoys life with playing Irish Traditional Music with the guitar and drinking Guinness.

Immunity to Change / An Everyone Culture by Robert Kegan

Leadermorphosis EP. 79: Lina Maskoliūnė on Lessons from a Self-Managed Business Experiment in Lithuania