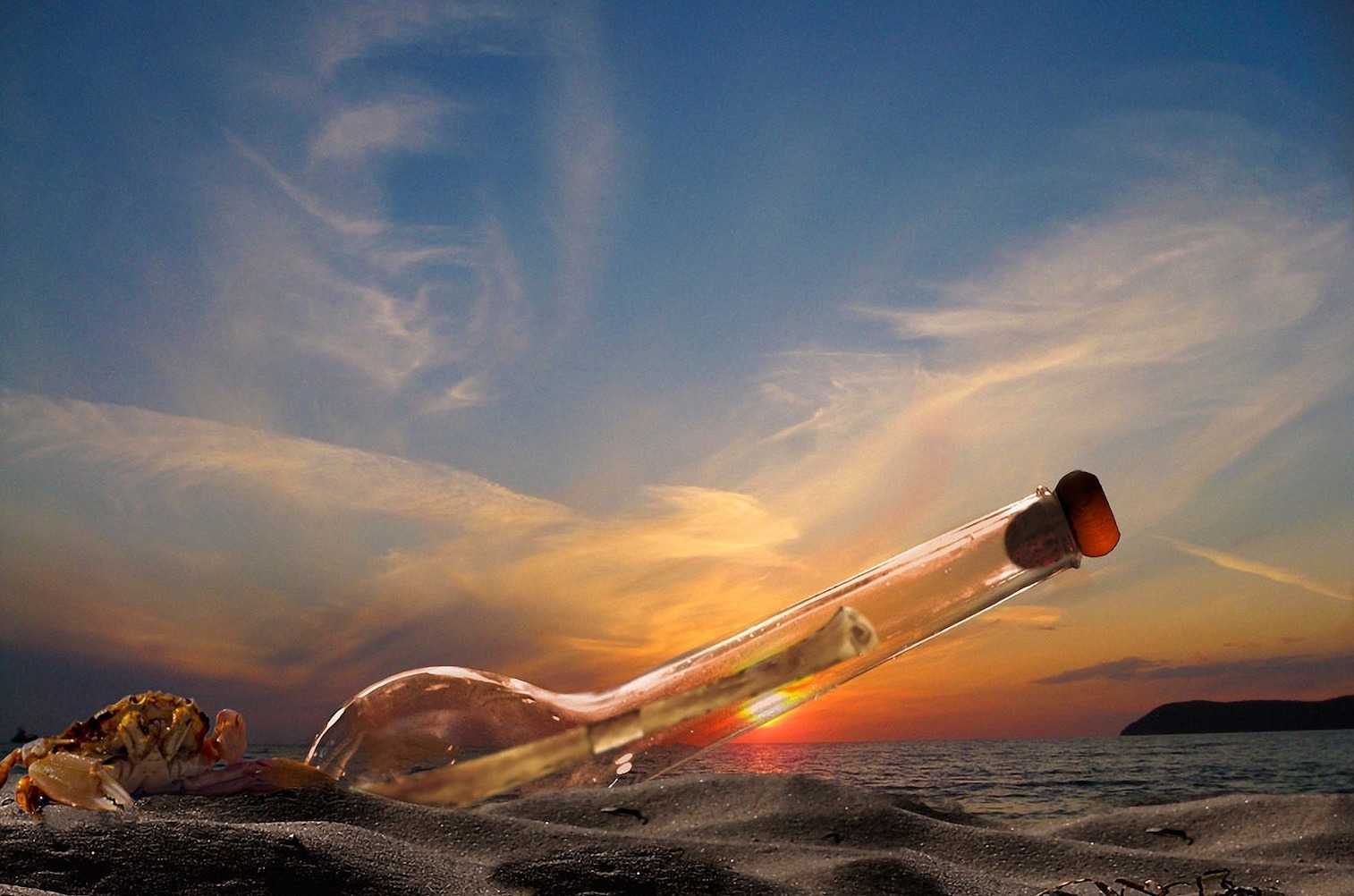 Next Stage News – Message in a Bottle from the Future

You are walking on a beach, the sun feeling full of life as it warms your skin. Birds are chirping in nearby trees. The ebb and flow of the waves is almost hypnotic. You glance down because you see a glint in the sand. A bottle! You bend down to retrieve it and are excited to see paper inside. Easily removed and unfolded, it appears to be a message addressed to you from a distant future rather than a distant land.

You have found and opened this bottle washed to the shore of the ocean of Enlivening Edge Magazine articles, so chances are that you’re the message’s addressee. Read on.

Below is the text copied here from the memory card found in the bottle. The brainchild of George Pór and Tina Gattermann, the idea of NSN went public during the closing plenary session of the Teal Organizations Track at the Integral European Conference, held in Hungary, way back on May 26, 2018. In that session, George hosted one of the 7 table conversations of the Pro Action Café. It was an exercise in the advice process in the Café that, by now, has become familiar to all organisations where people have chosen—and learned—to work without bosses, in the last couple of decades. (We managed to recover the original, wrinkled flipchart notes you can see here.)

People at that time were just beginning to see that a natural or social ecosystem (like “next-stage organizations” or a movement) is a whole, composed of parts like various species of plants and animals or like diverse organizations, networks, platforms, etc., each part having its specialized niche contributing to the whole.

A constellation of partners sharing an overarching evolutionary purpose

Since the childhood of NSN, its guiding idea has gone through a remarkable transformation, morphing in response to the following changes. The movements of democratic and civilizational renewal have been growing massively, touching all areas of social life. The Transformative Communities of Practice (also introduced at IEC2018) started becoming systems of influence in the emerging planetary reality. All those changes caused the core idea of NSN to grow into higher specificity.

The original idea of mirroring the whole and the parts to each other has been guiding all Enlivening Edge products and services to the “next-stage” movement, since EE’s inception. However, as these products and services evolved through functional differentiation, each found a unique niche in the movement journalism ecosystem. NSN’s more-specific reason for being, and unique niche, became this:

The ecosystem of transformative initiatives is energized by NSN responding to their events with rapid coverage, enabling unprecedented, fast-moving waves of social creativity.

That’s why we could notice, for example, that a social reporter sending in news about a novel group practice introduced in a Teal meet-up in Kiev could reach the “reinventing” meet-ups on all continents the next day.

A much-loved feature of NSN, as we know it today, is the Breaking News vidclips, specific to different social sectors. Those video alerts go out to all subscribers in a given sector in every country, automatically translated into the language of the viewers.

Those vidclips frequently become seeds for transmedia storytelling, picked up by Enlivening Edge TV, and told by a multitude of viewers/readers/contributors via interlinked watching-parties, blogs, podcasts, online forums, etc. NSN’s regular, real-time data and information collection is highly automated, thanks the smooth collaboration of social reporters and other citizen journalists with NSN editors (who tend to be professional movement journalists) and with blockchain-enabled micropayments. The positive social impact of the latter technology innovation was written about already in 2018, as we discovered in the archives of “Journalism That Matters”, an archive that began in 2019.

“An ecosystem of micropayments, in which everyone pays fractions of a penny for every article they read, has long been thought of as the holy grail for online journalism, the theoretical future solution.”  ~ What Could Blockchain Do for Journalism?

That real-time data collection is pivotal to the movements’ pulse-taking by their collective sensing and meaning-making organs and Integral Wisdom Councils, which are focused on various industries, social sectors, and countries.

Nowadays, content is also coming from Encode.org and other pioneering organizations of the new-wave management paradigm which are happy to syndicate it via the EE media enterprise. As an example of the “functional differentiation” mentioned earlier, the more substantive thought pieces, with longer shelf-life, get published in Enlivening Edge Magazine and the time-sensitive ones aimed at higher velocity ripple-generation go to Next Stage News.

NSN is not only reporting the news but thanks to its “Appreciative Inquiry”-style generative interviewing, also frequently creates newsworthy interventions, where the interviewees and the interviewers both get transformed by the process.

A special edition of NSN has just celebrated the 50th translation of Laloux’s trend-setting Reinventing Organizations book into all major languages of the world with field reports from reading-group meetings in companies and universities, even in prisons. Here’s the first 16 of the translations.

This message wouldn’t be complete without mentioning that as the delegates of the first Planetary Constitutional Assembly of the Commons are gathering, teams of NSN reporters, videographers, evolutionary cartographers, and digital storytellers are converging on the venue.

As we place this message in the virtual bottle, we hope that it will fall into the hands of the right people in the early 21st century timeline. We will know that it did, if it becomes a memory of the future inspiring action in that present.

George Pór is an evolutionary thinker and a strategic learning partner to visionary leaders in business, government, and civil society. He is the originator of Enlivening Edge and teaches a course on “Transformative Communities of Practice” at Meridian University. A select list of his articles and book chapters on the fields of collective intelligence, organizational and social renewal can be found here.