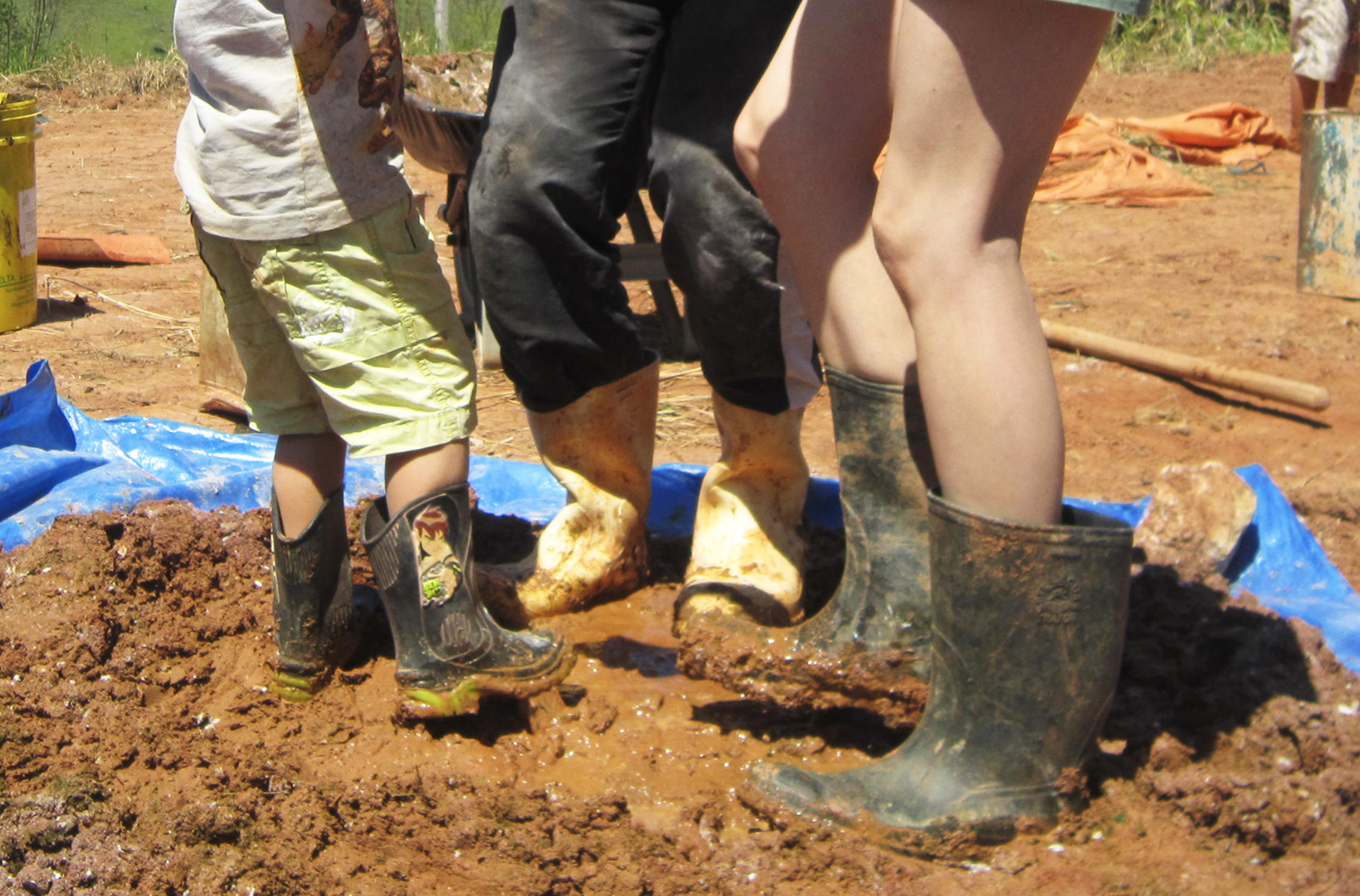 This story is part of a new series from the Enspiral Network called Enspiral Story Dojo, a place of tales about practice and transformation into a life with more meaningful work. It was originally posted on the Steemit platform. Full credits below.

He was fast asleep, and I had been staring at him for the past 40 minutes or such. From the outside, I’m sure it looked like some sort of dad and newborn son bonding moment. First-trip parents have this habit of looking as mesmerized as their infants.

But the truth is, I was not really looking at him anymore. My vision was unfocused, my attention inwards. Three days after my firstborn first came to this strange world, I gave myself an unsolvable puzzle: “What do I need to teach this creature?”

This question brought things into perspective in an unsettling way. I knew how to order pizza, how to pay taxes or how to drive a car. Above all, living in the São Paulo megalopolis, I had been honed and shaped as a master of work. Yet, none of this seemed fundamental, intrinsic to life. What was it then?

So I wondered while I wandered through the LED-lit city streets.

Life is pretty sweet for an art director in “Brazil’s New York” — or so I would think while eating smoked salmon sushi paired with Belgian draft beer. People think Paris or Sydney are big cities, but only if they’ve never experienced anything like my hometown. Even the original New York is dwarfed by our 12 million inhabitants (and counting). Anything any other big city has to offer, we have it with extra bacon on top.

Perhaps the most important thing a big city offers you is access to knowledge, particularly access to knowledgeable people. No matter how specific your area of interest is: perhaps you’re a big fan of baking reality shows — well, there’s a real chance that a specialist will visit your city one day or another.

So I looked far and wide for the people who seemed to carry a piece of my new jigsaw — what are the fundamentals of a good life. This is how I ended up finding Joanna Macy, an amazing American environmental activist and scholar of Buddhism, and signed up for a four day retreat.

I started to move away from finding the answers to the important questions and instead I was searching for the systems that operate around those questions — I felt my questionings were somehow fresher. If we need food to live, then where does it come from, what does it do inside my body and where does it go? I got interested in permaculture, bioconstruction, and systems thinking, and I spent all my free hours trying to learn how to apply them myself.

It was by no means a quick process: years went by, we had another baby boy, and still the ball was spinning around the ring, taking its sweet time to land. Yet, the path led to an inevitable (and weirdly enticing) conclusion — our just-like-our-parents’ São Paulo life was not helping us teach the truly important things to our children.

A few months after yet another permaculture immersion retreat, my wife (nicknamed the Wizard, long story) and I finally amassed enough courage to play our big poker move: we sold everything. Our apartment, our TV, our chairs, our damn door knobs — all to fuel a dream of buying a piece of land in the green and fresh outskirts of our town.

We have a common expression in Portuguese: “When I got here, everything was bushes” — something similar to the English expression, “before it was cool.” Well, in our case it was very literal. Our beloved new home was nothing but a bunch of grass and more bushes than you would believe. In fact, it was so wild that it was pre-Stone Age uninhabitable, so we rented a small house in the nearby town. A provisory arrangement so we could start preparing our new home.

While I spent a big chunk of my time trying to raise money for our daily life and to afford the many specialized services a new house needs, the Wizard was juggling between taking care of our little boys, finding where to obtain unusual building materials, and teaching yoga. Luckily the Wizard can always count on her enchantments.

So, the real journey has begun… from dream to drawing, from drawing to building.

With our bare hands.

We’re Not in Kansas Anymore

Fine, we did use our bare hands a lot, but admittedly not everything was manual labour — and that was a problem.

Two city-dwelling souls living in a tiny nowhere village was challenge enough: if you needed something, it will not always be available. That might sound pretty normal to many of you, but to me it was extraterrestrial. What do you mean when you say that no store in town has spare drill parts?

What do you mean when you say no store in town ever had any spare drill parts…ever?

It’s amazing how many things I took for granted — I remember after our second month there I’d have sold my soul for a simple washing machine. Phone signal became a luxury, electricity was not always guaranteed, internet was bumpy (and honestly it still is).

I remember, years later passing by São Paulo, just looking at the asphalt on the street and thinking, “thank you for being here,” and also imagining all the many invisible labours that putting that blessed thing there represented.

Some days the countryside gods were so displeased with us that we’d drive somewhere and by the time we were going home, the dirt road had been destroyed by a tropical storm.

When that happened, we’d sleep on somebody’s floor. I cannot thank them enough for their kindness, but still I felt the whole deal was a bit humiliating. Why did I leave my wonderful apartment and my food delivery app to put my kids to sleep in someone’s couch?

During moments like this I’d look at my children expecting to be chastised — I guess the Wizard and I were always too attuned to the financial and infrastructure crisis happening almost daily, and we expected our little ones to be just as well.

Instead, I’d find them sleeping. To them, sleeping on somebody’s couch was just part of life — they adapted much quicker than we did. Looking at them, I’d relax my shoulders and my worries.

It felt like living inside one of those Pixar movies where the children understand some layers and adults understand others. Somehow, it was working: this whole great escape was already teaching them many of the truly important lessons.

The problem lay with the grownups.

I was juggling all my tasks the best I could so I could still keep my old art director job remotely. It was tricky and headache-inducing sometimes, but doable.

The Wizard had a tougher time: she used to teach yoga for big companies and made a good buck out of that — in fact she earned significantly more money than I did. Now, all of a sudden, she was earning very close to zero. For the first time since she moved away from her parent’s place, she was a financial dependent again.

You might think you’re ready for that, you might plan it step by step in your head, but you’re not. You’ll never be. Perhaps if you anticipated how difficult it would be, your courage would fail you.

Some days were just fine, others she would wander around the house feeling lonely, even when the kids were around. Fights would break out between us and again and again I had that feeling of what the hell am I doing here. I remember wondering if we could persist on being together.

Eventually she found a job as a physical education teacher at a local school — it was stiff work: the education methodologies were quite archaic and the money was a mere shadow of her former São Paulo wages. Yet, it was a beginning — above all it was the perfect excuse to connect us with the local community.

It was the beginning of some sort of emotional spring — and the rewards would soon follow.

That’s the end of the first part (of two) of our story. The next part will have beautiful art, forest fires and something that’s the evolution of a family.

This was the first part (of two) of our story #01, originally called “The House Builds You”. Part 2 of this story is here.

This tale was about (and co-written by) Renato Inácio, a designer and permaculture enthusiast living in the countryside of São Paulo, Brazil. Narrative support by Joriam Philipe, Enspiral catalyst.

If you’re curious about Enspiral and its participants, you can read more here or support the network. Renato Inácio, a designer and permaculture enthusiast living in the countryside of São Paulo, Brazil.