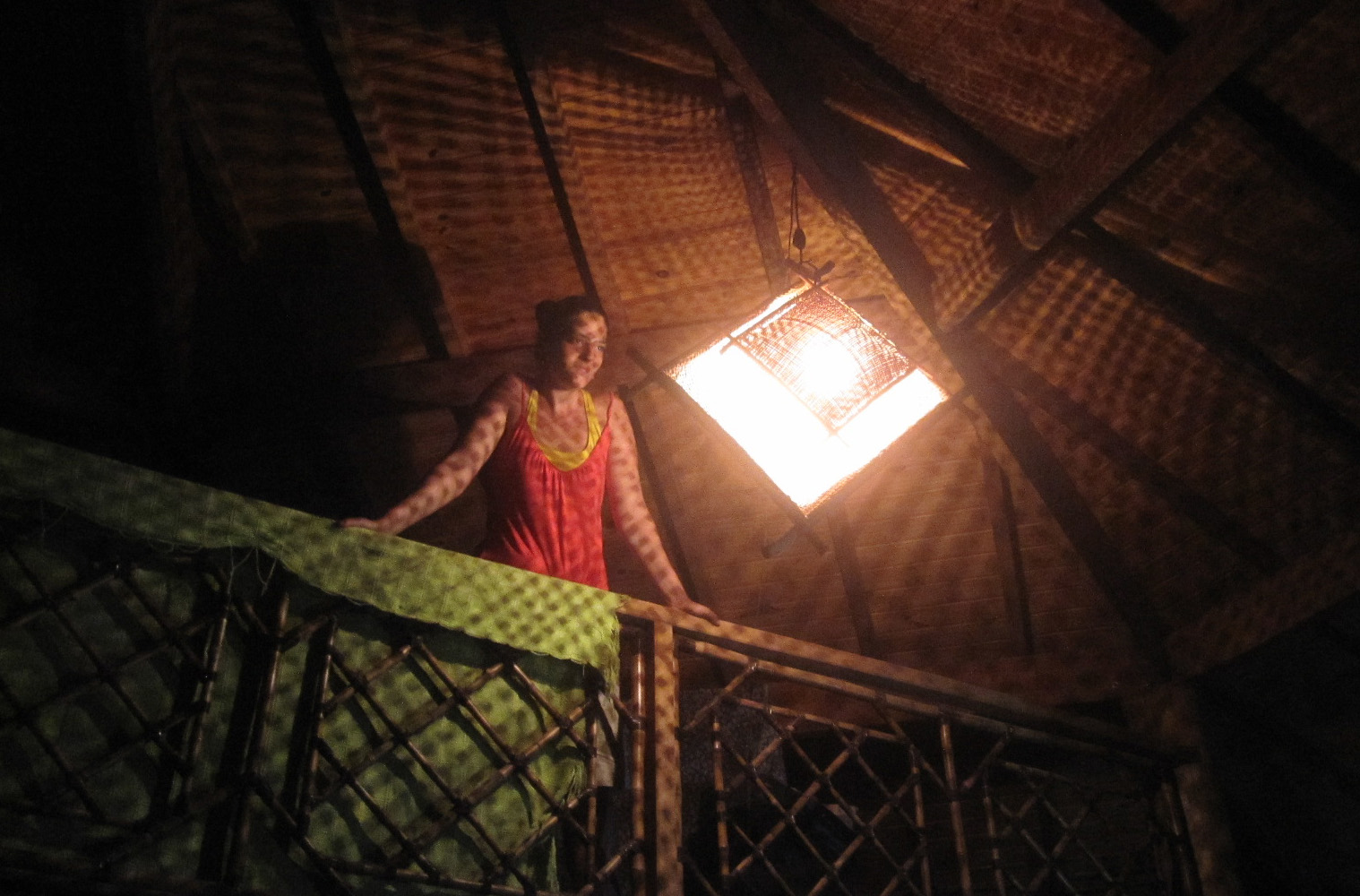 This story is part of a new series from the Enspiral Network called Enspiral Story Dojo, a place of tales about practice and transformation into a life with more meaningful work. It was originally posted on the Steemit platform. Full credits below.

Part 1 of this story is here.

Distinguished Members of the Audience

Picture this: a pleasantly warm evening in the middle of a wild place, around us a cacophony of chirps. We’re all preparing to go to sleep while the fireflies make beautiful patterns everywhere — we need to mind them because tonight my family and I are sleeping inside a camping tent.

Surrounding us, the unfinished walls of our half-baked new home. There’s more bricks laid down today than there were yesterday. We’re all smiling, chatting about windows and kitchen sizes: our new place is so customizable that it feels like playing some sort of colossal Lego game.

It’s amazing how freedom can paralyze you sometimes. The beginning of the construction was a bit delayed, exactly because we could do anything! How big do you make your home when the only limitations are your imagination and vigor? How do you organise the rooms? Do we really need rooms? Why?

It all came together one day when I was doodling possible homes. My first 14 drawings looked like versions of the same old blueprint with various sizes of living rooms and toilets. As an artist, I knew this was going nowhere, so I started with something different: a circle.

It clicked. Perspective and context were always big drivers. The geographic and climate conditions worked as constraints to guide bold decisions. East, West. North, South. The strong winds directions, the sun movements from solstice to equinox. I felt alive and I felt the paper could feel it.

3 months later, our new house looked like a big circus tent, an illusion boosted by our quasi-lack of internal walls, the different spaces separated only by colourful pieces of fabric. I gotta say, it really looks like a great place to play: so my children played. They ran around and climbed on the windows they built themselves — even a round window by their own suggestion! Why not? We could do anything.

The locals, who really went out of their way to help us stack the bricks and install the electric system, were delighted. From the start our new place was a powerful gathering spot: with didgeridoo classes, ecology workshops and potlucks happening weekly. We hosted people from all around the world and even (to my utter delight) some permaculture jedi masters.

It was a dream.

Except when it was not.

I Saw the Guys in the Distance

It was not the first time it happened, but soon enough I’d find out this instance would be different. While I prepared myself, armouring my body with the thickest of all my clothes even under the scorching Brazilian Sun, the guys vanished. It meant it was about to begin.

The fire started gingerly, as they always do — an orange glow colouring the forest’s green. The dry day helped: quickly the blazes were roaring. For the longest time I felt so angry that I refused to believe there was a reason for someone to set a forested area on fire, I’d rather think the people who did this were just evil. Turns out, of course, that there’s a profit to be made, a whole fire market.

It was time for my last preparation: a cold bucket wash. It served to contain the heat, but also to heighten my senses.

It always felt to me that the worst part of dealing with the wildfires was that I was forced to destroy what I had so dearly created: a huge chunk of the firefighting work was to keep the flames away from fuel, that meant hastily removing small trees and bushes from its possible path.

I knew the fire was stronger than I was, so I’d sacrifice a part of my own reforestation area as a tribute to this angry entity — and I’d do my best to create some sort of wet barrier where the fire could not spread any further.

I was lucky the first two times. This time, when I got closer to the action — my whole body sweating profusely — I thought that was it. It was too big. I’d have to run back home, save a couple of precious belongings and flee. The fire was spreading so violently that I’d even miss the chance to see my dream house burning to the ground.

Somehow I persevered — I don’t think my brain was functioning in its perfect state that day. While I desperately fought the flames (and even fought for my own safety a dozen times), I kept thinking it was all for naught. It was too big, too quick, too destructive. Why would these people set fire to this beautiful place? To my family? Too big. Quick. Destructive.

By the end of the day, I had lost a lot — but the house was still standing. My muscles aching, I thought to myself that it would take over a year to rebuild and plant everything we lost, and who knows when I’ll see the guys in the distance again? I didn’t cry that day after the fire, but I had a somber expression.

The Wizard approached me in my gloomy mood. She waited until I was ready to talk, which was a while. I asked her exactly what I was asking myself: why did I bother? Why did I risk my life putting out a fire if other fires were to come?

That day she told me something I’ll never forget. She said:

— “You didn’t go out to put out a fire today. You went out to show your children how to find the strength to fight for what you care about.”

What Comes After Home

While I was writing this tale, I looked up and there was my son — the same son I saw in a cradle a lifetime ago, just a bit bigger now.

I realised I knew everything about him.

The ideas that influenced our family to go through this journey were so powerful that they seeped into other areas. Our relationships have reinforced beams we installed ourselves, our conversations are cyclical and its byproducts are used in songs. We live in our circus tent and we really know every detail in it — and in ourselves.

Even more: by creating this environment, we’d somehow created a powerful invitation, a social magnet. Our house is always full of movement, of knowledge, of people who want to be here.

It felt to us that we had somehow surpassed the rank of home — we needed a new word to represent our attunement state. Thus we came across Waru: a term originally from Australian aboriginal people that means, “a way of living that improves others’ lives.”

It might sound poetic, but to me Waru has a very bioconstruction-inspired realness to it, as if the word itself felt like the clay I could build a house with.

I remember one day overhearing my sons’ conversation — they decided they’d raise chickens. Among them, ages 10 and 13 by then, they chose a place and a size for the coop, and they made sure to dedicate some extra energy so the chickens wouldn’t feel cold during the chilly days.

When the plan was laid down, then they came to me to ask for advice and materials. I was suddenly the sidekick and couldn’t be prouder.

Finally, I had an answer to the difficult questions I asked myself right at the beginning: what is really fundamental to life? What should I teach my children to improve their existence?

Better yet, I didn’t have an answer: I had a process. Whatever I was thinking I should teach my newborn son all those years ago proved to be a two-way street. I learned as much as I taught. Every new idea had a ripple effect.

This is not a lesson you can get from a book: you need to live it every day. Our captured rainwater becomes our next soup. Our waste provides the nutrients that our banana trees need. Our conversations transmute into invitations to the community and eventually gatherings, classes, encyclopedias.

Every system is thought through — from electric insulation to emotional triggers. We’re in constant contact. We depend on each other and we wouldn’t want it any other way.

This is the second part (of two) of our story #01, originally called “The House Builds You”. Part 1 of this story is here.

This tale was about (and co-written by) Renato Inácio, a designer and permaculture enthusiast living in the countryside of São Paulo, Brazil. Narrative support by Joriam Philipe, Enspiral catalyst.

If you’re curious about Enspiral and its participants, you can read more here or support the network. Renato Inácio, a designer and permaculture enthusiast living in the countryside of São Paulo, Brazil