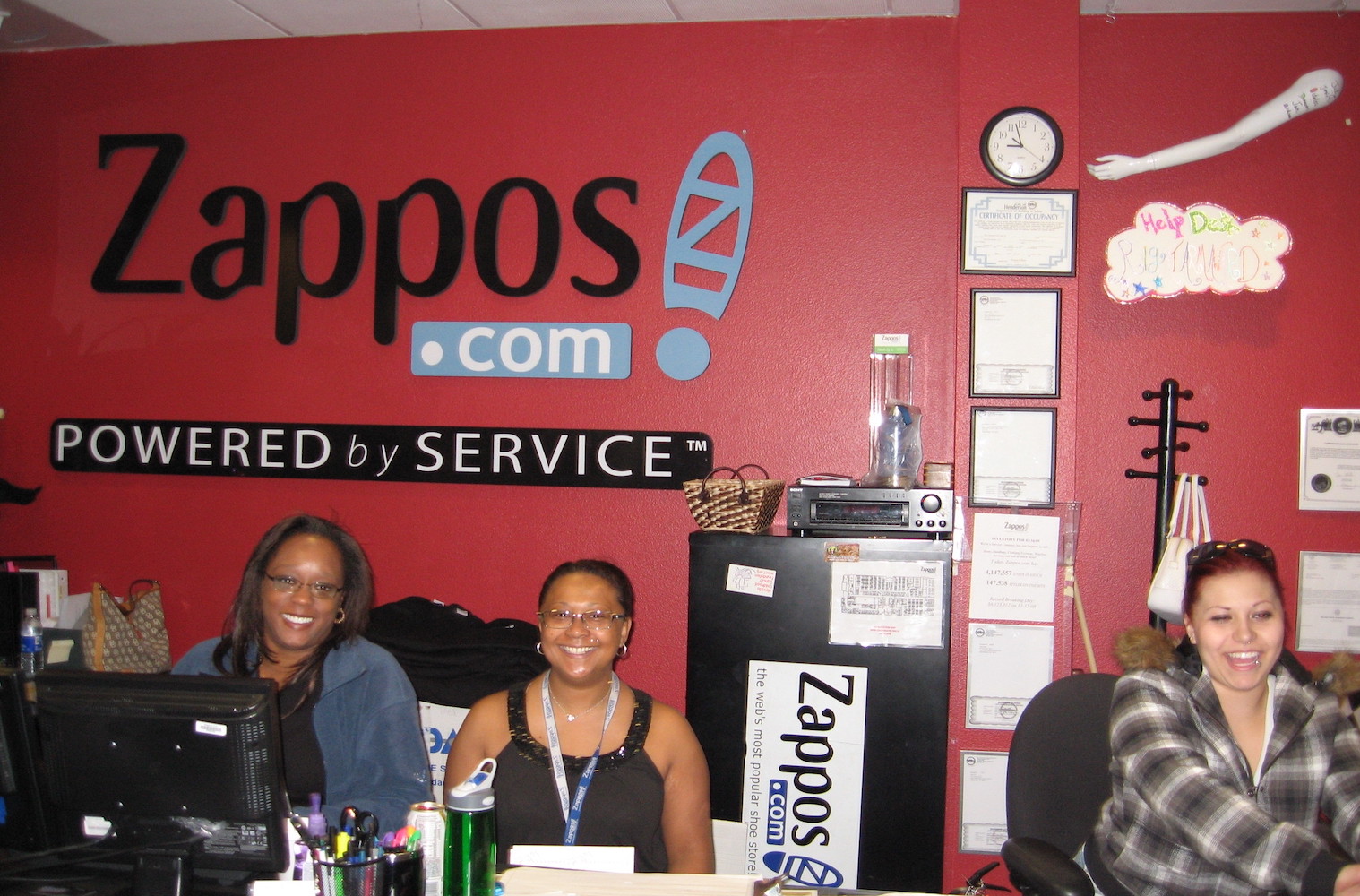 By  Joost Minnaar and originally published at Corporate Rebels.

Roughly five years ago, we loaded into a campervan and drove throughout California to visit companies like Google, Morning Star and Patagonia. We wanted to learn everything about their unique ways of doing things. While most of this trip occurred in California, we also wound up making a side-trek into Nevada to visit Zappos at their headquarters in Las Vegas. It was an interesting experience—they had been working with Holacracy for some time, and employees’ opinions about that organizational experiment were a somewhat mixed bag. Some liked it; most were skeptical. Much has happened since then.

One of the employees we met and interviewed during our time at Zappos was Rachel Murch. She was recently featured in a Boundaryless podcast episode where she talked with host Emanuelle Quintarelli about the “post-Holacracy” journey Zappos has now been on for several years.

However, before we dive deeper into Zappos’s more recent post-Holacracy journey, let’s first recap the company’s early days with this structural approach.

Founded in 1999, Zappos is an American online retailer specializing in shoes that currently employs around 2,000 workers. The late Tony Hsieh, who served as CEO from 1999-2020, started to move the company towards Holacracy around 2014 with the aim of creating a more decentralized structure.

Hsieh was driven by the idea of turning a company into a city-like environment—but without any central planning. Why? Inspired by the book Scale by Geoffrey West, Hsieh argued that cities are resilient and flexible, and every time one doubles in size, productivity per resident rises by 15 percent. (Conversely, traditional companies usually see per capita productivity fall as they grow.)

Hsieh chose Holacracy as the tool needed to access that kind of resilience and productivity. “Aside from it arguably being the most publicly well-known, it is one of the only pre-built, out-of-the-box options that any organization, regardless of size, sector, or industry, can implement,” he said at the time. “It immediately provided us with a set of rules and processes that everyone could see, with a lot of the nuances and checks-and-balances already figured out for us.”

Holacracy provided Zappos with a tool to break free of traditional organization and introduced a shared vocabulary to help people understand what it means to be self-organized and self-managed.

However, employees at the company said pure Holacracy started to create some challenges on its own. “Our circles were still arranged hierarchically, where budgeting or headcount was allocated from the top down,” Hsieh explained. He also argued that instead of circles being arranged hierarchically, each should really be its own small business or start-up.

These challenges resulted in Zappos’s employees being more focused on solving internal problems within their own organization rather than focusing externally to satisfy their customers’ needs.

To solve these challenges, the company needed additional methodologies and mechanisms to refocus on their customers and reach better self-organization and self-management levels. So, after practicing Holacracy for several years, the company decided to evolve beyond its pure form, leading to the introduction of three new concepts over time:

In March 2017, Zappos introduced a Haier-style internal marketplace where circles (or teams) run like small, independent businesses (like Haier’s microenterprises) with a strong customer focus.

As part of this solution, Zappos argued that each microenterprise had to determine the services it would provide to others. They can be within the company, provided to other microenterprises, or involve outside clients.

This enabled each microenterprise to think and operate as its own autonomous start-up, as long as it met two simple parameters:

Zappos initially argued that each microenterprise had to manage its own budget. But they ran into a problem with this view, as Holacracy still dictated a traditional, top-down approach to budgeting.

Instead of budgets being passed top-down from the leadership through each microenterprise, Zappos developed the concept of Customer-Generated Budgeting (CGB) around September 2018.

CGB can be seen as a kind of network approach to budgeting where budget conversations and transactions happen between microenterprises across the organization.

In addition, CGB allowed microenterprises to keep most of the revenue they generated for themselves. This ensured that microenterprises no longer had to fight for their annual slice of the budget pie but, rather, earn their budget directly from their customers instead.

In early 2019, Zappos implemented the slightly ominous-sounding Triangle of Accountability (ToA) concept, a framework set by the leadership in which all market dynamics between the microenterprises occur.

The ToA aims to provide each microenterprise in their internal market with a minimal number of constraints that enable maximum levels of autonomy and accountability.

As long as microenterprises stay within these constraints, they can engage in any type of business they desire. In fact, they can pretty much do whatever they want and spend their money however they want.

The framework is based on three guidelines:

From Budgets to Bank Accounts

Rachel Murch, who implemented MBD at Zappos, relayed to Emanuelle Quintarelli how these concepts work in practice. Here is an excerpt:

“If Zappos is the enterprise, there are teams that live within it. They got the opportunity to manage and deliver products or services, as long as they lived within the three sides of the Triangle of Accountability.”

“You had to differentiate based on culture and core values. You had to deliver the very best service. That had to be a differentiator, and you had to basically pay the bills. Break-even in our model meant using a P&L structure. Every team had its own P&L, and we kind of blew up the traditional budgeting system.”

“In a traditional organization, there is a top-down budget. You’re also incentivized to spend as much money as you can so that you can get more money the next year, or at least the same amount. And that’s not really how we live our day-to-day lives. In my personal bank account, I’m not trying to spend all the money I have there by the end of the year so that I can start afresh the next. That’s just not something we do.”

“Why not apply that thinking, and make budgets basically bank accounts? Every team had a bank account, and every team had an opportunity to be a customer, a service provider, and an investor. We had service agreements between teams.”

“If I’m in the development team, I’m providing services to the merchandising team to let them put their goods on the website. There’s a service agreement between those teams. So that’s where you’re getting your money.”

“And all of that was tracked using a homegrown system. It gave teams the opportunity to reinvest in themselves to grow their team. If they wanted to charge more internally or externally, they could sell their services externally. They could reinvest the way they wanted to.”

“We also started experimenting with things like team-based compensation and being able to pay your team what you feel is necessary. Obviously, you still had to pay the bills…”

Murch: “Every team had to put together a menu of what services it provides, and what the cost is for those services. That’s where we started as a baseline. And this is what we do.

“We kind of took it to another level and put it into the CFO tool (circle financial overview), so everybody could find what services exist. And then based on that price, you’d enter into a service agreement with whatever teams need your services.”

“You’re then a customer of other teams, or you want their services. It creates this service-provider-to-customer relationship. In the beginning, we had a kind of block-funding, but it didn’t take long for it to become more of a network—a network with a bidding system, basically.”

According to the principle of CGB, each microenterprise puts together a list of services, including costs. Anybody can find what’s needed and set up a service agreement to become a customer.

The digital CFO tool manages all the transactions transparently—including invoicing. Expenses and costs can be seen by others and include the percentage of time spent, along with overheads, benefits, taxes, and profit.

The CGB mechanism levels the playing field, compelling all microenterprises to provide services or products and generate revenues from at least one customer.

Microenterprises had to pay the company 50 percent of additional revenue. They could keep the other half to invest however they chose. This led to some teams going truly entrepreneurial in various directions.

“A lot of teams were able to experiment with different things,” says Murch. “Look at the last few years, when Zappos took over a theatre on the strip in Las Vegas. There’s Zappos Theatre. There are some interesting businesses: the audio-visual team, for example, provided services to external clients and grew.

“There are many great examples,” she continues. “And one of my favorites is actually Zappos’s Adaptive Team that started in the early days of the MBD initiative. That came from a phone call from a customer expressing a need. One phone call turned into this amazing business to help people who have adaptive needs, things that they’re challenged with, and the Zappos adaptive platform provides functional clothing for them.”

Interestingly enough, Zappos didn’t force everyone into an entrepreneurial role.

“There’s a place for everyone,” says Murch. “Especially if you’re on a team, you don’t have to be the entrepreneur. We did introduce a program to help people experience an entrepreneurial mindset.”

Later on in the process, the company began experimenting with team-based compensation mechanisms to boost entrepreneurship.

“We hadn’t quite reached a point where they were able to give bonuses to team members and truly give compensation, you know, whatever made sense for them,” Murch explains. “We did have some small teams experimenting with that, but it hadn’t got through to the organization yet. I think that’s really where we wanted to go.”

Zappos is one of the many cases in our upcoming book about Haier and its Rendanheyi Model. The publication deadline for this book will be around the winter of 2022. Want to stay in the loop about everything involving this book project? You can subscribe here.