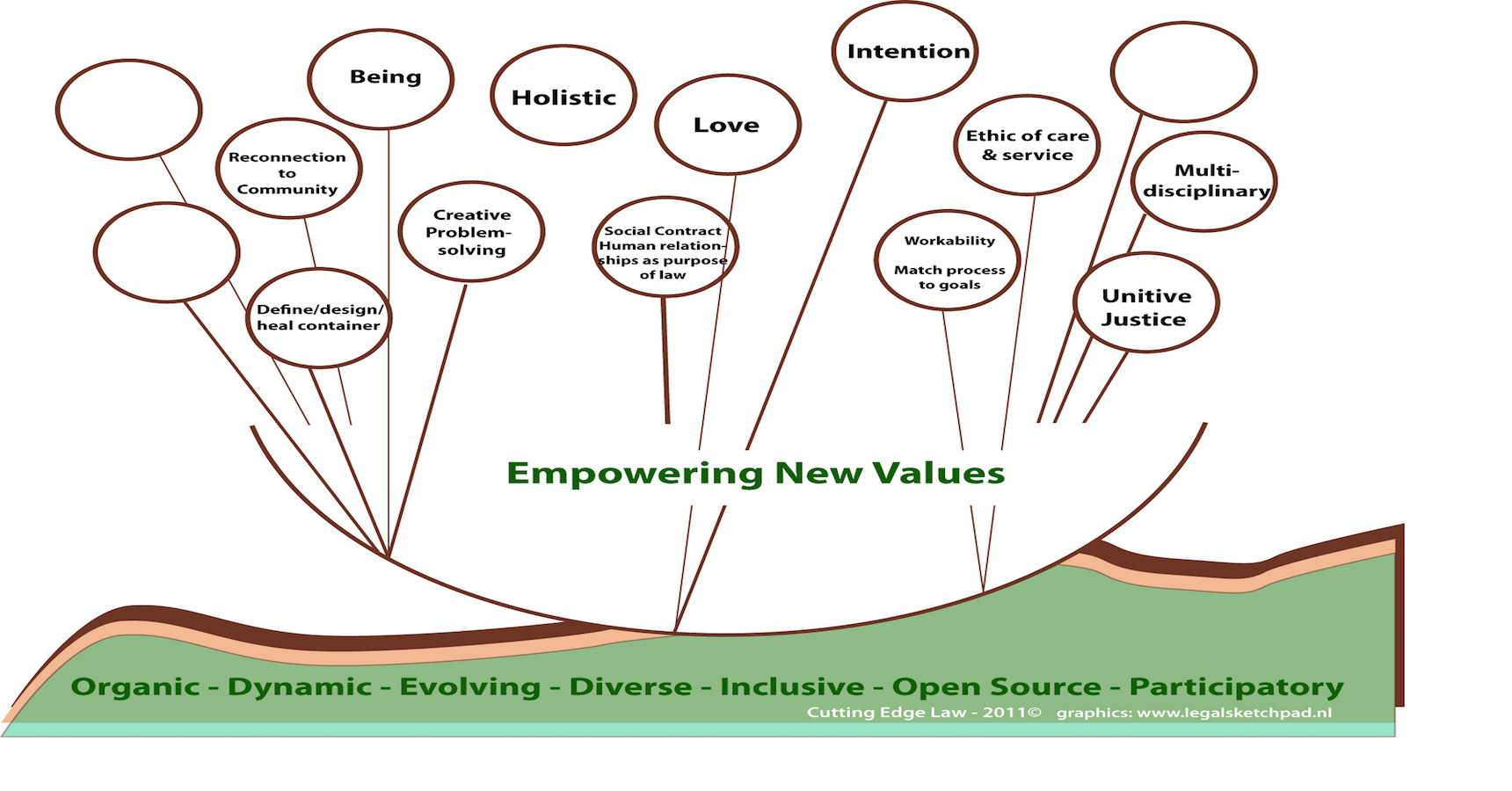 Over the past twenty years or so, many lawyers around the world have been developing conscious law practices and models, mostly in isolation, often even shunned by the more mainstream law firms.

These evolutionary lawyers have emerged from ranks of regular legal education, grounded in the standard legal principles, but there has been more: a sense of consciousness that propels them to learn more, reflect, align with values, and create new ways.

As one colleague told me, “I knew that I had to find a new way to practice. I couldn’t continue to do the damage that the old way called for me to do, to my clients or to myself.”

For more than nine years, I have been traveling the world, meeting these lawyers who are operating in a new paradigm that I call Integrative Law but could just as easily be labeled as Teal Law. We’ve often met in groups, created communities, shared our journeys.

In March, a group of us came together for a different kind of meeting: we gathered to explore an alternative organizational model for working together. We had in common that we knew about Frederic Laloux’s book Reinventing Organizations, and it provided a basis for our common inquiry.

We each have a story about how we came to an awareness of RO and Teal. Years ago, I became interested in spiral dynamics and integral theory. I became certified in Spiral Dynamics Integral, studying with Don Beck whose work was inspired by Clare Graves, the initiator of the spiral system. Don influenced Ken Wilber and Wilber adapted many of ideas and the research put forth by Graves, Beck, (and Chris Cowan, also a pioneer).

Like the version of the Spiral Dynamics Integral founders, Wilber’s derivation is described in colors, representing developmental stages: Red includes the heroic leader who seeks loyalty; Amber is the charismatic ideological leader who seeks conformity, and within Orange the leadership model is based on achievement of success (material or other kinds of success) and the leader seeks followers to cooperate and contribute to that success. Green, the stakeholder-driven models, are emerging in many cooperative companies.

From that lineage, Frederic Laloux came to write Reinventing Organizations. Unlike the previous explications of the spiral, Laloux’s version grabbed the imaginations and spirits of the organizational development community. Each stage provides a framework that gives structure to organizational design and goals. Besides offering up the framework, he provided the vivid color of examples, stories, about new models that have been emerging.

Reinventing Organizations unleashed something. Imaginations went wild and suddenly, there were big waves in the changemaker scene; interest grew in the concept of evolutionary capacities of people being measured by values and the different ways they have organized themselves.

This shift in the organizational structures ran parallel to what I have been seeing in the legal world.

The old organizational structures are embedded in the typical law firm culture, just as they are in companies. Just as in companies, some leaders are breaking free of the old models and striking out to create new ones.

According to Wilber and Laloux, Teal is the next evolutionary model for human organizing, exhibiting self-management and distributed leadership as its model for organizing.

The typical law firm is a bottom-heavy hierarchy, very far from Teal. The associates work like serfs to support the partners, trading their wholeness and souls for the dream that they will someday become partners, rise to the top, and achieve the predictable success. (Even this is not really true. Few associates become partners. Studies have shown that the job of associate attorney is the most miserable job and the rates of suicide, addiction, and depression among lawyers are far higher than the average person.) In a typical law firm, work is measured in six minute increments and each long day is broken into segments with a time sheet to account for every minute. Lawyers battle each other-even their own colleagues-to be the best, to be seen as the winner in court or negotiations, often at any cost to relationships and well-being.

In March, the group of lawyers I mentioned earlier gathered in the small city of Almelo in the eastern part of the Netherlands. We came from different directions–not only the Netherlands, but also Spain, Brazil, the UK, and the USA. One of our members is a South African lawyer currently living in the UK. Our perpective was global. Our commitment: we knew there were better ways.

Almelo is the home of Buurtzorg, the community nursing organization founded by Jos de Blok in 2006 and one of the principal Teal organizations used as an example in Reinventing Organizations. Jos joined us for our retreat, and we were lucky to have his experience and help.

We explored what a Teal International Law Platform might look like, what would be its values, what were the needs that could be met by such a platform (needs of both the client and of the lawyers)?

We created relationship. We thought together, meditated, feasted, drank, listened to music, and had intimate conversations that are normally reserved for people who have not just met on Friday night.

I wish we could say we were able to launch a new structure, that is is rolling out as we read this. There are too many ideas to sort through for that to happen so quickly. What we did was to arrive at the sense that something wants to emerge from our collective inquiry, and the recognition that it would need careful nurturing to consciously call it forth.

We are clear that Teal Companies need Teal Lawyers to navigate the Blue/Orange systems and governmental requirements. Teal Lawyers are “bilingual” in that we speak the old system and can thrive in the new one.

Some of the work will happen organically. There are synergies in different practices. We are exploring ways of working together, and are planning additional meetings. Clients have appeared who need lawyers in more than one country and some of us are collaborating across borders. We still have a lot to talk about.

Author’s note: Parts of this article were influenced by the press release developed by the group. J. Kim Wright is the author of two American Bar Association best sellers: Lawyers as Peacemakers, Practicing Holistic, Problem-Solving Law and Lawyers as Changemakers, The Global Integrative Law Movement. A lawyer since 1989, she is a systems change architect for the legal profession.  She is an American nomad.  www.jkimwright.com

Featured Image is by Susanne van der Meer of Siftvisuals