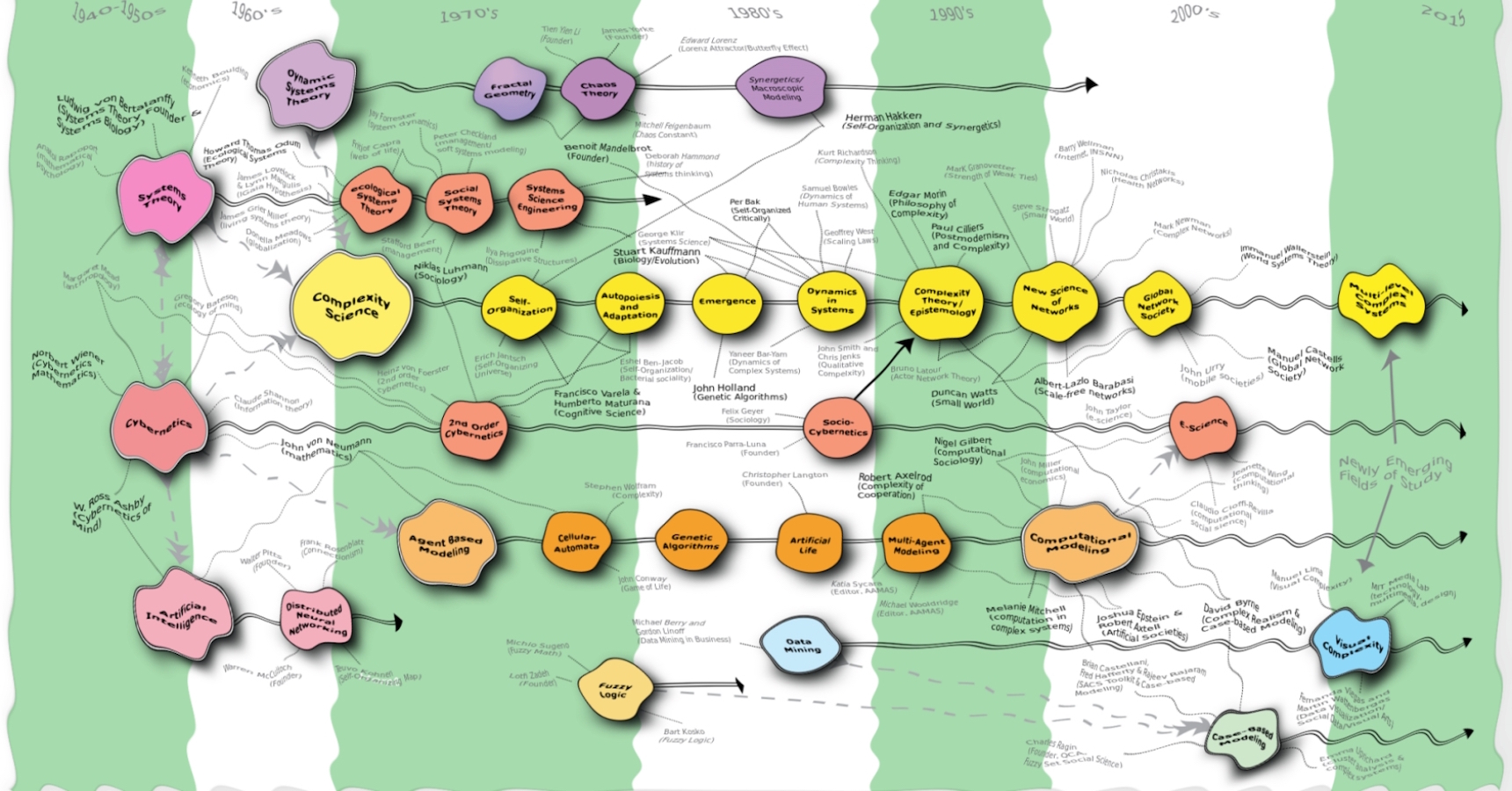 Let’s make it clear from the start. You can’t “manage” complexity, and we will only begin to step into a second-tier world when we stop trying.

The idea of managing organisational complexity has a long and deep history, with theories ranging from Bateson/Wiener/von Neumann Cybernetics [i] through Russell Ackoff [ii] Systems Thinking to McMaster’s iCAS [iii] (intelligent Complex Adaptive systems). All of them are brilliant and none of them will deal with today’s levels of complexity. Nor were they truly sufficient to deal with yesterday’s. All of those attempts do what Orange materialist science does—because this is its method. It looks at the things, the components, and examines the interactions that take place between them. It sees causes and effects, and produces wonderful complex diagrams of the flows. These can provide lots of useful insights, and they are helpful tools. But they don’t make it possible to manage complexity.

The systems that we are talking about are living entities. They are networks and meshworks of relationships and contexts. They are ecologies of mind (to use Gregory Bateson’s [iv] phrase) which underlie ecologies of being and action. You cannot manage living systems from this perspective, any more than you can create health with surgery and pharmaceuticals. It takes a body to do that.

Surgery and pharma can fix acute conditions. What is the equivalent for organizations of a health-and fitness maintenance approach that maximises the capacity of the living system?  What would raise their skills to the equivalent of peak athletes, top musicians, and brilliant actors?

The notion that we can manage complexity is engendered by a mind-set that emphasises the analytical mind. This is understandable because so many of the advances of the past few centuries have been derived from that capacity and their creations. Galileo, DaVinci, Newton, and Einstein are our cultural icons, and so they should be; those achievements matter, and there will be more of them.

But we need balance. What have we lost?  How much attention does Western society and its organisations give to the understanding of our intuitive capacities, our embodied wisdom? Has it ever occurred to you, when deciding on your food choices, to ask your body what it wants or needs?

I am using these biological images because your body is one of the most complex systems you know. 40 trillion cells are collaborating through diverse organs, regulatory systems and internal coherence mechanisms that are part of our intelligence—you know this every time you try to think clearly with a hangover or a cold. That system responds to its environment at every level, from disease to climate to societal conditions. You cannot manage that from your mind. You rely on the fact that it manages itself. Millions of years of cellular, mammalian, and primate evolution refined that process.

We cannot create healthy organisations unless we respect them as ecosystems with their own intelligence.

And where they are not intelligent, they will only become so when we stimulate their capacity to become that. Our attempts from the outside to see them objectively might have some use in generating data, but only if that data becomes part of what that system knows of itself, and enables it to move toward self-management.

Spiral Dynamics has been teaching aspects of this for years. If you read Beck and Cowan you will find chapters devoted to “natural design” and to enhancement of the organisation’s internal “systems flow”. The “Teal” approaches that Frederic Laloux has so inspiringly presented through the map of Clare Graves’ developmental stages, lead us to the vision of what self-management can contribute to the interior function of the organisation.

Self-management is a major antidote to the belief that complexity can be managed and it is a step in the direction of trusting the organisation’s own intelligence.

It’s a good start, but there is more to the organisational ecosystem than that. For those who wish to facilitate, to help leaders, or to contribute to the development of their organisations from within, the shift in mind-set is deep and fundamental. Since it is not possible for any of us to know enough, it takes a step into trust.

We have to trust that the system itself is smarter than any of us are.

That is a challenge to the widespread concept of Leadership. As Nora Bateson [v] has said, “When we look to nature for models, we find that there is not an ecology that would accommodate the existing model of leadership.” An ecology does not make plans. It doesn’t look at its history and make projections. It doesn’t make a decision in one of its sub-circles. Its responsiveness is located in every part of its sensing mechanisms—internal and external—and in the responsiveness it has to the conditions it senses. There is no system of forest management that is as sustainably intelligent as the forest itself. Human systems can add a cognitive capability to the available intelligences. But until such cognitive capability is embedded in the sensory and perceptual wholeness, unless it allows all of the pattern-recognition that such a wholeness would generate, cognitive intelligence is liable to be disconnected and dysfunctional. We don’t have to look far to witness the examples.

Managing complexity is, in effect, an oxymoron. You can’t know enough. Only the system knows.

Typically, the problem with our organisations and societal systems is that they are prevented from knowing what they know, constrained by habits and past thinking from their potential freedom to respond, supplied with limited or false information and prevented from making the changes even when they can see them.

So the necessary response is to help them see more, increase their freedom to make changes, reduce the surrounding constraints, make structures and processes more adaptable, and build agile and flexible mind-sets that sense and respond to opportunities or difficulties with equal relish. Ultimately, the step out of first tier and into second tier (Teal/Yellow or beyond) is a step out of fear. That which has just been described calls for trust. This is not blind trust. Tensions need to be sensed and responded to. But it requires enough trust not to close down, not to revert to the old methods (the ones that were at the level of the problem).

There is an ongoing challenge to step up and step beyond, to operate from the next level. This side of complexity, our only option is over-simplification—that which looks simple, but cannot embrace the uncertainties, nuances, and interdependencies and which delivers unsustainable outcomes.

The other side of complexity is an organic embrace, which increases sensitivity to the patterns and allows the system to live into and through its interdependencies.

The system becomes the simplicity. As Soren Kierkegaard put it: “Life is not a problem to be managed, but a reality to be experienced”. So let’s stop managing, and start living.

[iii] Michael McMaster. “What is Organisational Intelligence: An intense primer” 2016

[iv] Gregory Bateson “Steps to an Ecology of Mind”  https://www.amazon.co.uk/Steps-Ecology-Mind-Anthropology-Epistemology/dp/0226039056

For those who might want to read the content of the Featured Image, going beyond the visual-displayed message of “complexity breaking down,” here is the link to the readable version: https://upload.wikimedia.org/wikipedia/commons/c/c0/Map_of_the_Complexity_Sciences.svg

Jon is an organisational mentor and a trainer in Spiral Dynamics Integral. For those interested in learning more about the natural design approaches to organisational development, he is offering a Level 2 certification training October 5th to 7th 2017 in Victoria, London. It is a prerequisite to have completed a Level 1 certification. The next Level 1 training is March 2-4th 2018.