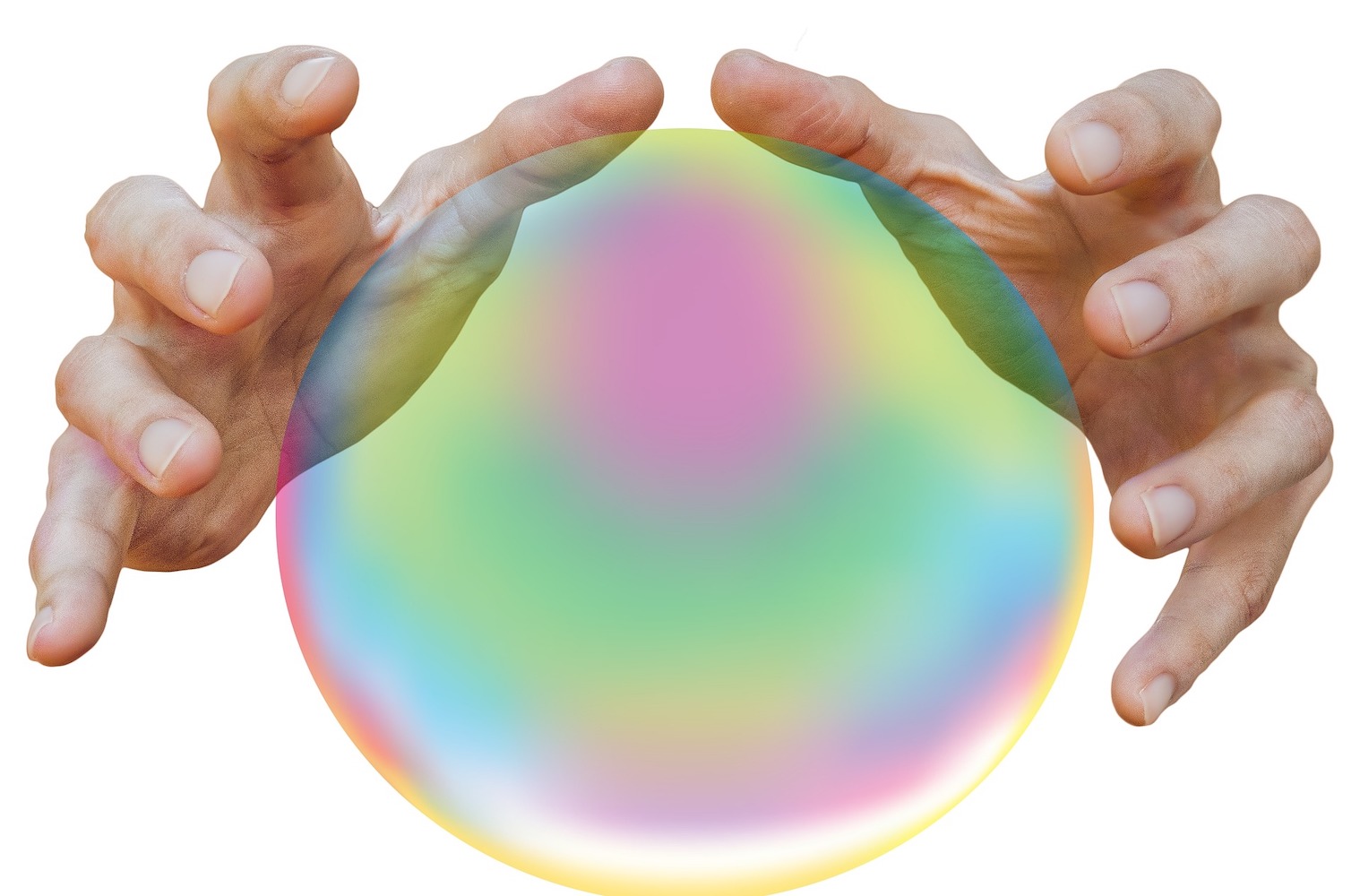 By Emanuele Rapisarda and originally published on Medium.com

Each of us in our organizations can envision a better future.

But whatever is the future that you dream, I’m learning that the worst thing that can happen is to accomplish it. Follow me on this journey, and let’s try to make sense of it together.

Sometimes, we can see and touch perfection. It can be seen when you closed that deal with that client and everything seemed to have gone magically in its place. Or that day in which your team worked so perfectly that it seemed nothing could stop you. Moments like the aforementioned feel perfect.

In all those cases, perfection is only temporary. In fact, the subject, its contexts and the relationships between them change fast and go back to a state of disequilibrium and fuzziness. I learned something from those experiences and that is, perfection appears in non-replicable moments in which we and the contexts are one.

Therefore, it seems to me that there is no perfection in itself. There are only impermanent conditions of resonance that we can prepare for, but not manage to happen when and how we want.

And what makes them not manageable is precisely the fact that our organization doesn’t exist if not within many contexts. Some of these contexts are quite easy to identify as they are economical, technological, political, and ecological.

Some others could be more unusual for an organization, like the religious or artistic one but they exist, and ignoring them will not change the implicated relationships with them. Instead, ignoring them will just make the tensions and flows between ourselves and the rest of the world harder to see.

The good news is, we are not just passive victims of this condition. We can live in those multiple contexts and participate with them in the continuous unfolding of our present, and in the intimate interdependence with the other people and organizations around the world. In doing so, we can do something I’m learning it is fundamental for our sustainability and growth: we can sense.

Not to understand and not to analyze. To sense involves using all the receptors of your body. It involves using all senses of your organization: people, knowledge, relationships, technologies, money flows. Every part can be a precious way to capture the unfolding of reality around you. And this open listening cannot be caged in a 4-quadrants diagram or in a power-point slide. However, it must be described in the multiple forms that it takes.

Techniques like the Warm Data Lab or the Open Space Technology can help you do this if used with mastery. But more than a solution, they play the role of catalysts of cultural traits that you have to nurture daily.

By sensing the reality, you can make sense of it. You can see the space you fill in the landscape and then you can move according to this new perception.

If you see it in this way, sensing is not just a matter of staying mindfully in the present, but also a way to move in the direction of the future.

So, sensing leads you to move toward the future that unfolds in front of you; a future that most likely was invisible before you sensed it.

In this breathing of sensing and moving, your organization can adapt its tools and processes, develop new competencies, evolve its culture and sustain the growth of its people.

It becomes a system that nurtures itself, thanks to the deep interdependency with the contexts in which it lives.

In doing so and by operating in your transcontextuality, you can get in touch with new feedback loops, and increasing returns can be put in place in terms of money, knowledge, technologies, relationships, value creation that you may have never imagined before or envisioned.

This means that what you imagined in the past was deeply influenced by your position at that moment, which entails the awareness you had at that moment. This can be influenced by your biases, beliefs, tools, people. This can also prompt you to imagine a perfect future from that position and point of view. But now that you moved and it became present, the perfect future you imagined may not be perfect at all.

That’s why whatever was the future that you dreamed, the worst thing that could happen was to accomplish it.

So, what?
Shall we just stop thinking about the future?

I don’t think so. Actually, I do believe we should nurture our vision for the future, and keep our dreams and projects alive. Just, with different lenses. Up to this moment, I have found three main points.

If the choices we make today will influence what we’ll get in the future and if the vision of the future influences the actions we take today, then why separate the two things? Why having a moment for strategy and then periods of actions? Why do different people work on different time and space frames?

We need tools and practices that allow us to work on a continuous breath of vision and action, coevolving the two moments in an interwoven texture: sense and move.

And we are lucky enough to live in an era where there are many means that have emerged in the last decades from the work of thousands of professionals and organizations all around the world.

The branch of real-time strategy-making and the new approaches that evolve the concept of strategy itself to a more wider and deeper sense-making and actualization (see Henry Mintzberg or Stelio Verzera’s articles) focuses on a much less linearity and causality between different times, and it embraces a vision in which the past, present and future are considered as parts of the same conversation.

In particular, in the article of Stelio, you can have a quite powerful introduction to the EcoSight Framework, which is one of the newest and most valuable way I know to expand your awareness on the new challenges we are facing in the business of the twenty-twenties.

Include multiple observers and descriptions

If the contexts in which our organization lives have such a strong influence on our evolution and if we are so deep interdependent with the rest of the world, why keep “us” separate from “the others”?

All of us, including top managers and CxOs have blind-spots. And this is true not only for individuals but also for boards, staff, teams and entire organizations. Systems have blind spots as well and allowing for different perspectives will help in reducing the influence of these blind-spots.

But it’s not just a matter of how many subjects are involved, rather it is also a matter of how many languages we use to describe our current position and future evolution. Do we just use words and diagrams? Or do we create the space for drawings, stories, serious games, arts and all the other ways we can express ourselves as humans?

Also in this case, you can use several tools and techniques that allow you to not being caged in one single mode of representing the reality around you. I mentioned a couple of them above, like the Warm Data Lab and the Open Space Technology, but many others like Lego® Serious Play® and the Story Cubes® are now widely used all around the world with scientific evidence and a huge amount of action research and on-the-field results.

The problem with such techniques is that from the outside, they appear so simple and it becomes easy to underestimate them and it ends up wasting all the real power and deepness they have, thereby running boring, useless or even harmful sessions.

Stop looking for *the* future

The last lens I suggest you to change is the reason why I wrote this article. I’m convinced that it is the very way to see the future itself that has to be changed. Not looking for *the* perfect future, but embracing the unfolding of *your* future.

Many times when I meet a new client, I am asked to speak about some “case studies,” And 99% of the time, it assumes that two organizations of the same size and in a similar market can apply the same solutions for their evolution.

Your story, your trajectory, your identity, your transcontextual relationships are unique. And thinking that your organization is “similar” to another one means being blind to the infinite shades that model your destiny into becoming what you will be.

Worse than ever, it is easy to fall in the trap of following the latest trend of agile, lean, teal, flat, bossless organizations as ready-made solutions trigger them to lose their power. Most of the time, the real value behind those kinds of frameworks and disciplines is sacrificed on the marketing altar, and you will end up having just a different name to call the old mess.

So, stop looking for the future and as I said from the onset, hope to never reach it. Instead, hope to be good enough to shape it while it unfolds through you. It will require discipline, courage, commitment, and mastery. This article comes from the experiences I’ve had in the last 5 years, working alongside many organizations with colleagues of immeasurable value. Nevertheless, the journey is still ongoing, and none of my words is final. Please, feel free to share in the comments your point of view about this article, and keep learning together.

Emanuele has been involved for several years in supporting organizations in their evolution processes through a holistic approach whose influences are manifold: Socio-Technical Systems theory, Positive Psychology, Lean Thinking, Complex Adaptive Systems theory, Warm Data, etc. – but above all through a strong and constant presence alongside organizations in their needs and in their real evolutionary dynamics. For this, he works with startups, multinationals and non-profit associations all over the world.
He is a member of Cocoon Pro. [email protected]

The Power of the Pebble