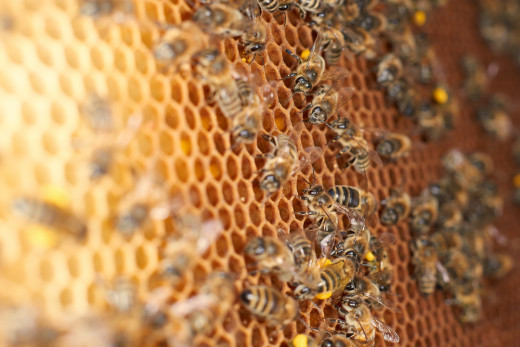 Originally written by Louis Rosenberg (with one editing change made below here by the author) and published on thenextweb.com. Conventional wisdom tells us that organizations run best when critical decisions are made by a strong and capable CEO.

This is true even if it means calling upon a temporary leader until a permanent replacement can be found (as we saw with Twitter’s recent scramble to bring on Jack Dorsey).

Of course, this begs the question – are there alternatives to top-down decision-making that can achieve better outcomes?

I’m not suggesting we do away with hierarchical leadership structures, but if there are ways for companies to make smarter decisions, it’s worth understanding them and exploring if new technologies can help us implement such methods.

To research this issue, I looked to nature and was inspired by the remarkable decision-making abilities of honeybees.

Like an organization facing bankruptcy or a desperate round of financing, bee colonies face a life-or-death decision every year – selecting a new hive location. From hollow trees to abandoned sheds, a colony will consider dozens of candidate sites over a 30-square mile area, evaluating each with respect to dozens of competing criteria.  Does it have sufficient ventilation?  Is it safe from predators?  Is it large enough to store honey for winter?

It’s a highly complex decision with many tradeoffs and a misstep means death to the colony. This is a decision even a seasoned CEO would not want to face.

As revealed by the painstaking research of Thomas Seeley at Cornell University, honeybees select the very best site at least 80 percent of the time.

You might assume that means each colony has a strong leader – “a Queen bee” that weighs all the competing factors, from the volume required for honey storage to the complexities of seasonal temperature control, but you’d be wrong. The Queen does not participate in any of the decisions that govern the colony.

So, who makes this critical decision about where the colony should move?  Nobody does.  Or, more specifically – everybody does.

That’s because individual honeybees lack the mental capacity to make a decision this complex and nuanced.  But, when they pool the knowledge and experience of their most senior scout bees, they evoke a “Collective Intelligence” that is not only able to make the decision, it finds the optimal solution.

In other words, by working together as a unified system, the organization (i.e., the bee colony) is able to amplify its intelligence well beyond the capacity of any individual member of the group.  And they do this with no bosses or workers.  No hierarchy at all.

This sounds like a useful skill, not just for bees but for human organizations.  After all, if we could amplify our intelligence beyond the capability of any individual on our team, we might be able to make better decisions and predictions, estimations and forecasts.  It’s exciting.

In fact, it’s so exciting it’s been the focus of my own research efforts for the last few years – exploring if networked teams can pool their knowledge, opinions, and insights to forge a unified Collective Intelligence that can think smarter together.

So, can we get smarter by pooling our knowledge, insights, and opinions?

Yes, researchers are recognizing the power that connected groups can unleash. At the simplest level, we can pool our intelligence by casting votes and taking the average.

Often called “the Wisdom of Crowds”, research shows that the average estimate from a large group is almost always more accurate than the estimates given by the vast majority of individuals. The problem is, simple votes are highly sensitive to social biases that can greatly distort the outcome.

For example, recent research shows that if you poll a team in a hierarchical organization, members are often influenced by what they think their boss wants to hear or what they think the group already believes.  Thus, instead of insights being combined and strengthened across an organization, decisions often get distorted as they go the management chain.

Even a relatively flat organization can have barriers to unleashing their Collective Intelligence.

These groups can be thought of as “herds” because they function the way natural herds do – a single individual darts in one direction and the rest of the group follows.

This tendency toward “herding” is exacerbated by social media and other modern technologies. We euphemistically call it “trending” or “going viral” but often it’s just a random impulse gone astray, amplifying noise rather than harnessing intelligence. In fact, a brilliant study out of MIT, Hebrew University of Jerusalem, and NYU shows that if you randomly assign the first vote in an up-voting system similar to Reddit, that single first opinion will influence the final result by 25 percent, even if thousands of votes follow.

So, what would a decision-making process look like if there were no leaders and no followers, but a balanced structure that allowed the group to solve a problem together and find the optimal solution?

For one, if everyone in an organization had an equal voice, it could resolve many of the current gender inequality issues in the workplace, which are quickly becoming a monumental crisis.

Other forms of discrimination – intentional or not – could be avoided as well.

But beyond that, could we boost our overall intelligence, making decisions that exceed the ability of any of the team members?

I believe we can, although we need to look beyond the simple votes and polls that have been the mainstay of Collective Intelligence efforts, and employ new methods and technologies.

One path is to refer back to those amazing honeybees. They don’t cast votes, they form systems – “swarms” – that use feedback loops to combine their input in real-time and converge on optimal solutions together. But can organizations make decisions that way?

Referred to as Human Swarming, teams can be connected by specialized networking software that allow them to form closed-loop systems and tackle problems as a unified intelligence.

In a recent study that I was involved in, groups predicted the winners of the 2015 Oscars by working together in online swarms and greatly out-performed standard votes and polls.

All in all, I’m optimistic that emerging technologies will make us better and better at harnessing the Collective Intelligence of organizations. This will allow companies to leverage the combined brainpower of teams by merging diverse ideas and opinions, insights and intuition.

This could lead to smarter decisions and more inclusive strategies.

Of course, using Collective Intelligence to guide decisions doesn’t mean leadership becomes less important, as there are many ways to be a good leader. It will just put more weight on other leadership qualities – like offering vision and encouragement, with passion and inclusion.

[You may read the comments made at the original publication site.]