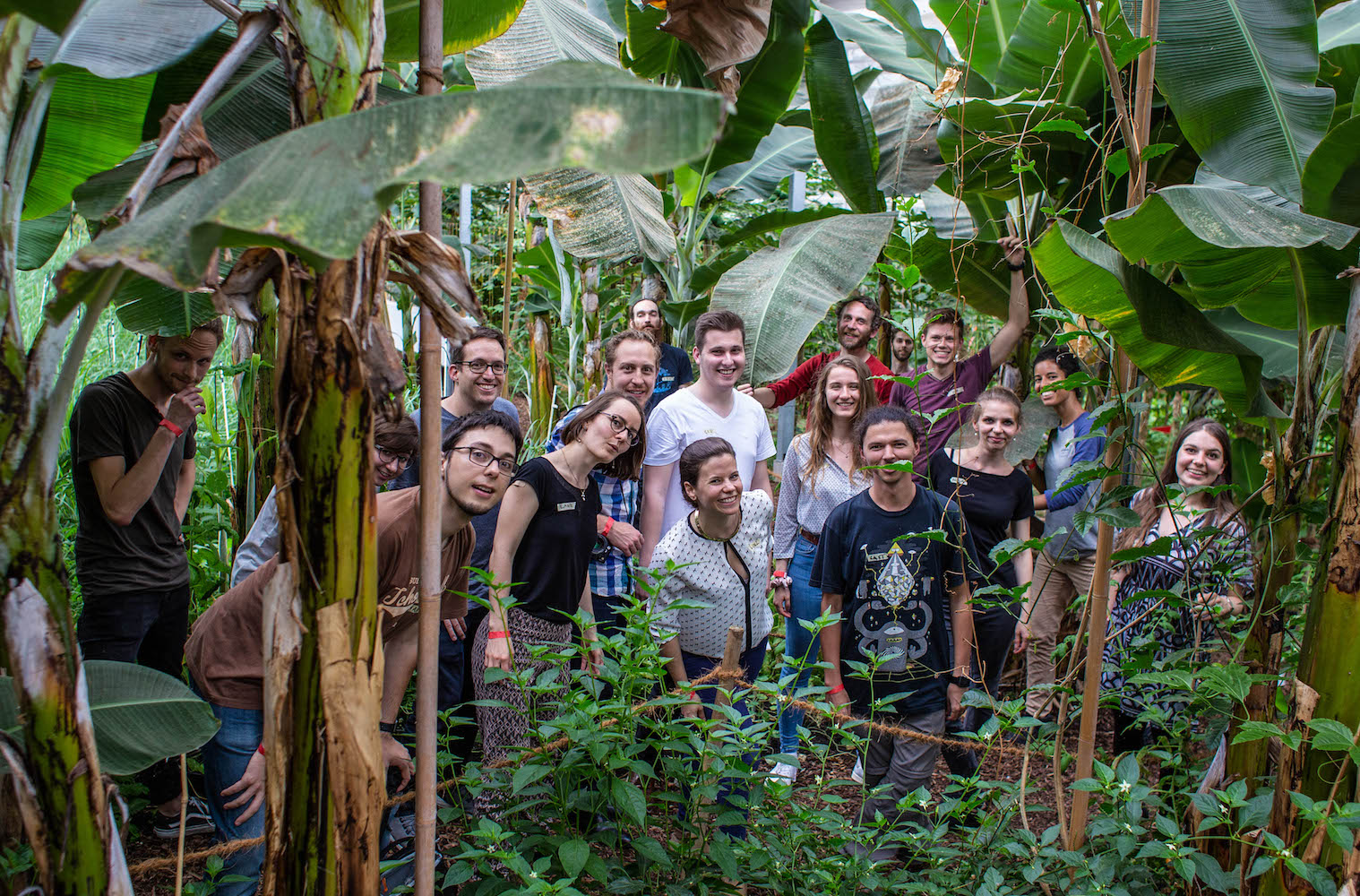 By Gloria-Mona Knospe and Lara Portmann, originally published at nothing.ch, here updated and with an introduction for EE Magazine

More autonomy, greater flexibility, and increased clarity about why we do what we do—that was our experience when we embarked on our journey to redesign our organisation, Nothing. Nothing is a venture lab aiming to make technology more humane , one product at a time. We wrote the first part of this article in November 2017 at the occasion of our six-month anniversary as a peer-to-peer organisation. Things have evolved even further since then, so read through to the end to find out about the latest developments of our peer-to-peer journey!

Today’s organisational models are reaching their limits—systemic ones, but also human ones: Leaders and employees alike are disillusioned, disconnected, and disengaged from their work. We strive to find a better, more integrated, and more purposeful way of working together. We need something different—something that allows us to re-connect with our work.

It is not easy to let go of the industrial-age work forms that we are accustomed to. But it is not impossible. We decided to embark on this journey and redesign Nothing as a peer-to-peer organisation.

What is a peer-to-peer organisation?

Peer-to-peer (or short: P2P) describes the key idea behind our organisational system: Everybody participates as a peer. There are no hierarchies, at least not between people. The only hierarchies that we have are hierarchies of work. Our P2P system is based on a few simple but important principles:

We have drawn inspiration from a variety of sources. Frederic Laloux’ book “Reinventing Organizations”, for instance, offers a great introduction to purpose-driven organisational forms (including tons of real-life examples from companies of different sizes from all over the world). Our own P2P system is also influenced by Brian Robertson’s Holacracy framework, an organisational model that aims to distribute and decentralise power in organisations.

Clarity about responsibility and reason

On April 20, 2017, we officially signed our P2P constitution. We have just celebrated our six-month anniversary of this event—what better time to give an overview of what we’ve learned on our journey so far?

The by far biggest positive change that we observe is the increased clarity about what people’s rights and responsibilities are—and, simply, more clarity about why we do what we do. We owe both to the introduction of roles. Roles record who is responsible for what. As such, they make authority and accountabilities explicit. But they are much more than a list of tasks. They also specify the purpose of these tasks. Each role has three parts:

Another big plus is that our P2P system is evolutionary. It is—by design—never finished. It lives and changes with us. Every individual aboard our rocket is empowered (and obliged) to modify the system by looking out for “tensions.” Tensions are gaps between our current system and a potentially better, future version of it: Is there anything that could and should be different?

Because everybody looks out for tensions related to their roles, change does not happen top down but originates from our roles themselves, when and where necessary. This makes the whole system very inclusive. And, it also means that we can react faster—after all, there are 19 of us looking out for both problems and opportunities!

Roles: the good and the bad

Of course, not everything has been easy. An important aspect of our P2P system is that it is based on roles rather than people. It is not people who have the power to take decisions, roles do.

The basis for our decisions should hence not be our own interests but our role’s purpose.

Through this, we can avoid implicit, personal, and ego-based decisions. Theoretically, that sounds great.

In practice, it is of course never that simple. We are used to making decisions based on gut feeling. It takes time and discipline to stop, check, and question personal assumptions. We’ve experienced that it helps to explicitly state which role we are representing or addressing. It may feel a bit awkward at first, but it helps to form a habit of making things explicit. The core of our P2P system is a transparent and continually updated visualisation of our roles. This visualisation records who is allowed (and expected) to do what—which in return gives everybody the ability to take action on their own. You can find an interactive demo of the visualization at https://demo.peerdom.org/circles.

This visualisation, now part of our digital toolset called Peerdom, has been with us since the beginning of our P2P system. The very first thing that we did was to map out everybody’s (at the time) current responsibilities. It would have been tempting to create a nice, ideal visualisation of our organisation. But the best visualisation is useless if we don’t live it.

In creating our role visualisation, we identified many (new) roles that are necessary for our company—but since our resources didn’t magically increase, we were struggling with keeping up: Some of us took on role after role without thinking about how many roles they could actually cope with. While it is tempting to take on responsibility, our explicit visualisation forced us to recognise our own limits. Because once responsibilities are explicit, you can’t get away with doing them only half-heartedly. You have to truly own them.

We are currently tackling this tension by introducing estimations about how much time a role takes. These estimations will help everybody decide whether they can or cannot take on a new role. Additionally, these estimations also help us decide if and where we should hire new talents, so that we as a company can grow with our system!

What we have learnt (so far)

So, what have we learnt in our first six months as a P2P organisation? It may be obvious, but let’s be clear about it: Such a redesign takes time. Our system is far from running smoothly. But that’s okay—change requires trying, failing, and then improving based on your failures. With our P2P system, we are learning to embrace failure as part of our growth and learning. It would actually be rather strange if we didn’t experience difficulties: Transitioning from the industrial to the participatory age always bears challenges (or: tensions!).

This prospect of failure and big changes might seem scary. There is nothing wrong with being scared. The most important thing is to be willing to try, and to not give up too easily.

The biggest challenge is—when failing—to not fall back to industrial age patterns.

Obstacles are simply tensions: If we stop for a moment and look at them objectively, they often prove to be not just a problem but also an opportunity.

Even after just six months, we can already benefit immensely from our P2P system. We can react faster, adapt more flexibly and overall take more informed decisions. But next to this, our P2P system has also brought change on a human level. It has brought us closer together, as peers and as humans. We are excited to see how our P2P system will evolve!

Recent developments in our P2P adventure

In the meantime, another six months have passed. We have added, changed and removed roles. We have processed hundreds of tensions. And we have grown as a team—literally speaking: Since the beginning of our peer-to-peer journey, our team has almost doubled in size.

Throughout our journey, we have also started developing an ecosystem of tools that helps organisations evolve as a decentralized, values-based collective of peers: Peerdom. Peerdom is still in its infancy, but it is evolving quickly.

We have the pleasure of developing it further with some early adopters, organisations that, like us, believe in finding meaningful, purpose-driven forms of working together. We’re thrilled to see that there is interest in Peerdom and that what started within our own organisation can help others, too.

If you’d like to know more, we would love to hear from you! One of our peers, Lex (Alexandre) is currently based in London. He is working most actively on sharing our peer-to-peer work with the world and sensing how we can make Peerdom an ecosystem that enables others in their organisational journey. He’s happy to hear from you at [email protected].

You can also get in touch with the Swiss team, in particular with Lang (Lara) at [email protected]. Be it to know more about Peerdom or to exchange experiences, questions and ideas in general—we look forward to your signal!