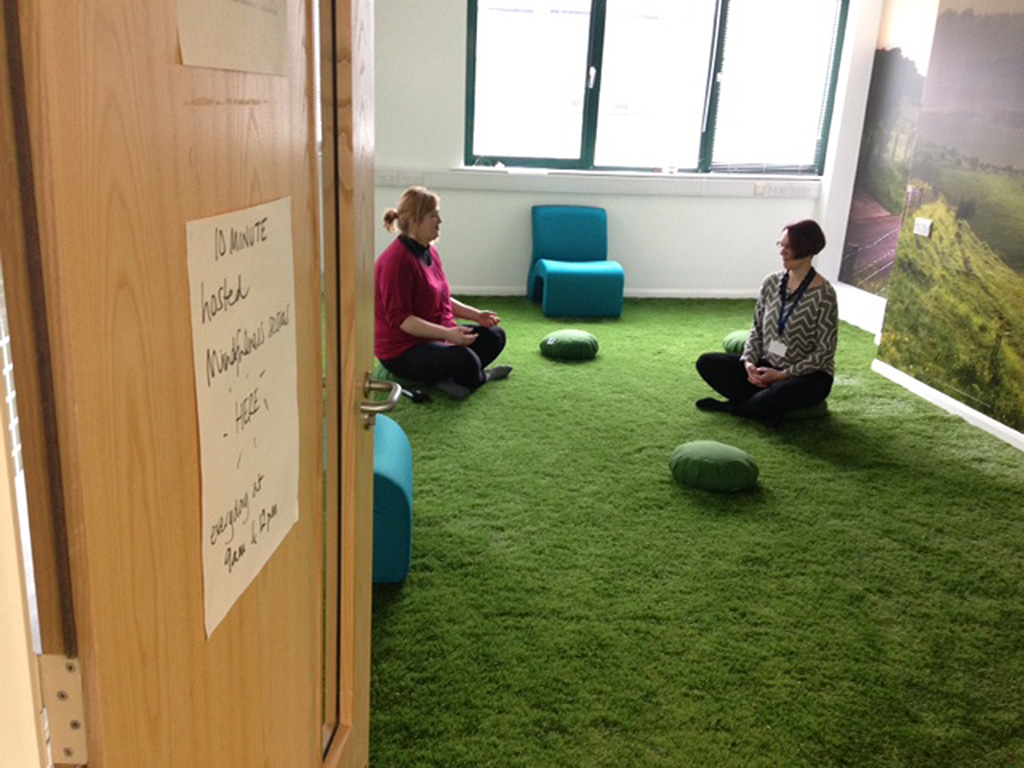 Making a Meaningful Impact in the Workplace through Mindfulness

Written by Emily Yates and published at http://brightonandhoveindependent.co.uk/

Brighton and Hove’s Integrated Care Service (BICS) in the UK carried out extensive mindfulness programs last year that has transformed its style of teamwork.

The changes to the workplace culture at BICS surpasses any usual conception of “wellbeing at work”, however – with mindfulness applied not just as a tool, but the company’s entire operating system.

In 2014, the community services provider hosted mindfulness teachers Joel and Michelle Levey, and systems theorists Barry Oshry and John Watters, for a series of workshops that set BICS in its new direction.

In-house mindfulness programs have since focussed on Frederic Laloux’s concept of the Teal Organisation – a self-managing organisational model with the qualities of “wholeness” and “listening to purpose”(Reinventing Organizations, 2014).

For colleagues at BICS, listening to purpose means coming together to make a meaningful impact on the people they serve.

Chief executive Zoe Nicholson said: “We were driven by a desire to put people in charge of their own healthcare journeys, so we can transform the current paradigm of ‘what’s the matter?’ to ‘what matters to you?’ As a result of our programs we now have a new purpose: ‘care unbound to create more possibilities for care in every moment’.”

Colleagues are also encouraged to practice “wholeness” in the workplace – a key Teal feature that aims to integrate the personal with the professional self.

The changes have led to two to three daily meditation sessions and a range of mindful meeting practices, including an opening check in time where each team member is invited to bring their whole self into the room.

Phoebe Munson, team member at BICS, said: “Our mindfulness strategies are part of a wholeness practice where the whole team acknowledges you leave your personal agenda at the door.

“Exposing one’s vulnerability in that way in the workplace is an action that can only be balanced by compassion – both support for fellow colleagues as well as the vital act of self-compassion.”

With great advances in “listening to purpose” and “wholeness”, BICS is also on its way to realising the third Teal principle of self-management. Most teams are now self-managing, and the removal of specific job titles has empowered staff with a more fluid kind of leadership.

In contrast to companies like Zappos (the US retailer whose sudden switch to Holocracy leaves some commentators in doubt), BICS is travelling a more organic route towards Teal.

Zoe Nicholson believes that “listening to purpose” and “wholeness” allow a natural kind of self-management to emerge.

She said: “Self-managing teams have always made sense to me but I felt the former two breakthroughs best to invest time and energy in.

“I had a realisation that listening to purpose is actually a set of skills and that the route to that might be through mindfulness. Our programs have aimed to build our capacity to listen to purpose, and develop the capacities of everybody to do that.”

John Watters, managing director of Living Leadership, introduced the work of systems theorist Barry Oshry to BICS. His workshops incorporate mindfulness to help people observe their habitual behaviour more clearly, bringing compassion and awareness into their relationships with others.

Mr Watters said: “In the first flush of enthusiasm of working with Teal principles some companies have neglected the potency of habitual behaviour and paid insufficient attention to personal and organisational transition.

“BICS by contrast have been very thoughtful about how they are introducing this new approach to management.”

Its founder Jos de Blok conducted a special workshop for BICS at Brighton’s Meaning Conference last August, forming the latest in a series of influences for BICS in its purposeful evolution.