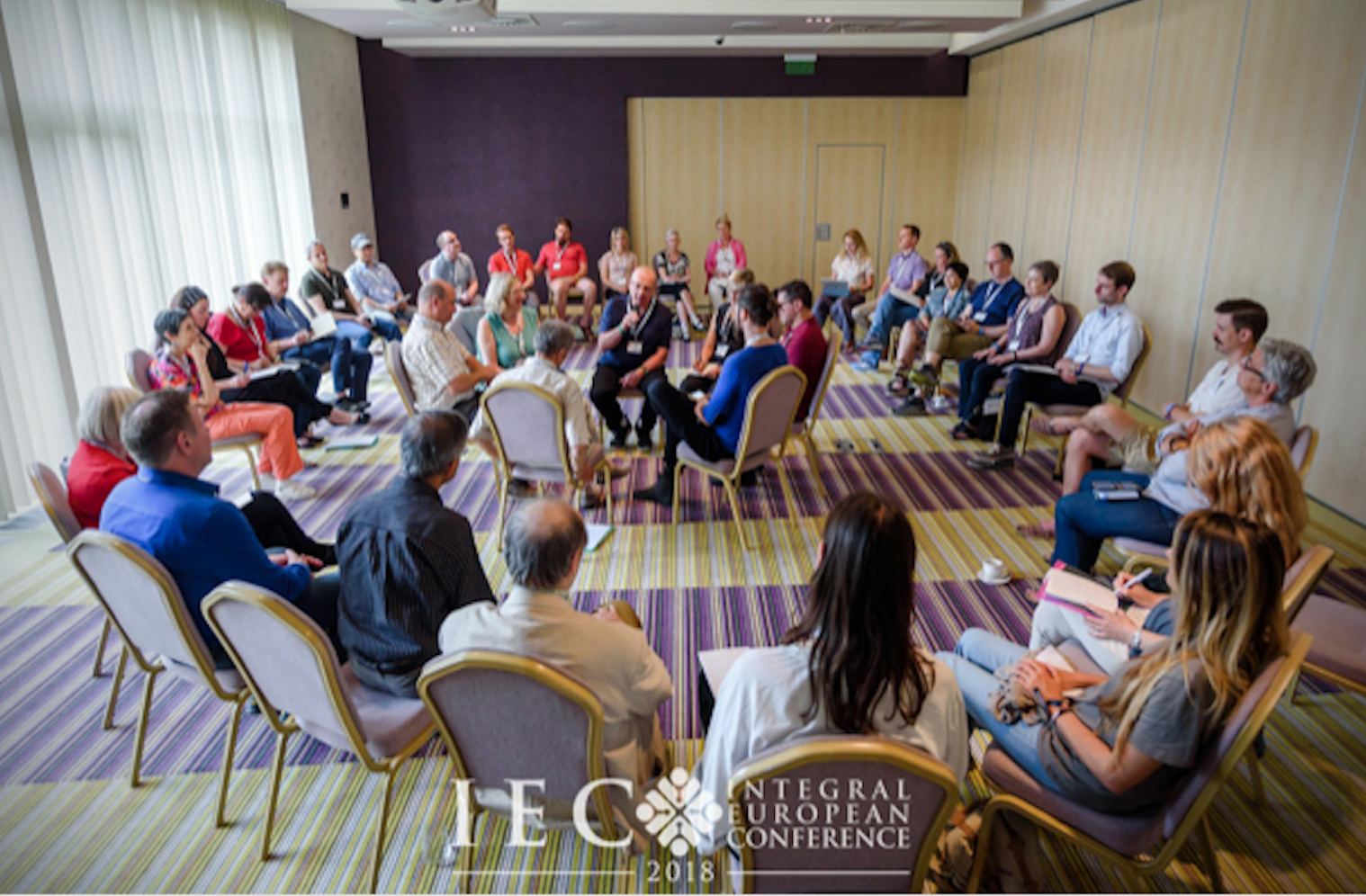 TeaCuP is what the first Transformative Community of Practice (TCoP) got nicknamed by its members. This fictitious author’s fictitious story is dated from the Fall Equinox 2018, which in the Northern Hemisphere will happen three months from now. It is also an invitation to those who feel inspired by what follows.

If after reading it, you also want to get a sense of how a TeaCuP relates to traditional Communities of Practice, please look up these articles:

What is Next? Transformative Communities of Practice

Transformative Communities of Practice as an Evolutionary Force

I love this time, the break of dawn, when the light begins to grow after the night and is percolating through the curtain. The house is quiet; my husband and the children are still sleeping. I’m supposed to, me too, get my 8 hours, but I can’t.  I’m too excited about my upcoming trip to London and visiting with some of my dear evolutionary friends in Europe, whom I’ve never met in person.

(The break of dawn is also a living metaphor for me, carrying the meaning of life’s much-awaited response to the political night’s injustices and despair in my country.)

After a stop in the bathroom, I’m heading straight to my writing den. Gratefully, I marvel at the Sun rising over the hills of San Francisco. Bathing in its rays, for a moment, I’m one with the Ultimate Reality, the Sun behind the Sun. I like to start my day with it, helps me take myself less seriously.

I turn on my laptop, open our TeaCuP forums and drop in the conversation flow about the preparations for the first of our retreats that we plan to hold twice a year. Back in the flow, now I’m fully awake, connected, inspired.  My body is tingling with as much electricity as I felt while sitting in the “fish bowl” inside the larger circle at the “The Power of Transformative Communities of Practice as an Evolutionary Force” workshop that George Pór and Aftab Omer led at the Integral European Conference 2018. (See the picture at the top of the page.)

The first forum that I visit each morning is the one where we share practices that support expanding our consciousness, enabling us to hold more perspectives, more complexity. When we started the community, we agreed that to be in good standing, we need to check in our virtual space twice a week. However, just like most of us here, I can’t resist the temptation to go there, tune in the latest messages coming from community members from around the world, and engage with the juicy questions of our practice, at least once a day. It’s like keeping our finger on the pulse of our intertwining lives, as the lifeblood of conversations that matter is flowing through our global body.

This morning, I don’t only read the latest updates. Something inside urges me to open a new topic, called The Wisdom Council, and type in the notes I took last night, after returning from the campfire of our local TeaCuP circle. Here it is what I’ve just posted:

The TeaCuP circle meeting started late afternoon. We gathered in my living room and watched a video, in which Aftab, Anna Betz, and George introduced us to the story of the Wisdom Council: how they partly discovered, partly co-created this process of accessing collective wisdom in the Enlivening Camp retreat, last May. We learned that the traditions it draws on include both certain Medicine Wheel practices of the Native American people, and Action Learning, a group process suitable to integrate organizational, professional, and personal development.

After a brief discussion of some of the unique features that they practiced during the retreat, we set the potluck table, had a tasty dinner, then moved to the garden and gathered around the fire pit, where my husband had already prepared the campfire for us and set the camping chairs around it.

Before the Council went into session, we shared our intention for it. Discovering and naming the common ground helped our field cohere. We also recapped some the injunctions we learned from the video, such as filtering out our personal biases as much as we could by speaking from the field and to the field, favouring questions over statements as we share what needs to be said, or integrating into our awareness, and the relating to, what was said before our turn. (It was also helpful to watch another brief clip where Aftab was talking about “post-mental thinking”.)

After the first person offered to be the focus of the first round and presented his essential inquiry, he received guidance, from the field, expressed frequently as new questions from members of the circle, pointing to deeper, explored possibilities. Due to the confidentiality of the process, I can’t tell about its actual content, but when it came to the “integration” round, we all felt touched by how profound it was, how much it widened the world of the Focus, and how big the difference was between perspectives from which he could look at his challenge before and after the Council.

Today, I will have one of those one-on-one calls with my learning buddy from the TeaCuP, where we share with each other a recent “shadow” incident. On those calls we interview that shadow of each other, which has shown up in a given incident, with such questions as “When did you enter her/his life? What did you serve?” or “From what did you protect her/him, at that time?” Of course, by the end of the call we’re still far away from genuinely saying goodbye to the shadow, but we got a few steps closer to stopping the disowning of it.

I find this form of peer coaching by evolutionary friends, with whom we share a journey of co-creation in the TeaCuP, particularly helpful to integrating the unintegrated parts of me, not only my shadows but also the earlier stages of my development that I rejected as soon as I thought I transcended them.

A good example of that is my relation to my “Greenness”. I became so allergic to its boundaryless over-inclusiveness that defeats focused and collective action, that I stopped seeing and embracing even some of its beautiful aspects, for example, I undervalued the warm feeling of our community’s “tribe space.”

My learning buddy is fast to point out such behaviors, without blame, just as an observation, which evokes a new insight, a new seeing-through some conditioned patterns of mine.

I’m keenly aware that all the individual work we do for waking up, growing up, and cleaning up would not be enough to change the culture and structures of our workplaces and institutions, which are not hospitable to human Spirit.

For that, we also need to show up as networks of transformative communities because only then will we be able to match the enormous complexity of the epic task. That was my main take-away from the workshop at the Integral conference in May, and working towards it with like-hearted friends was my main motivation for joining this TeaCuP.

Before cooking dinner, I hop on the ‘net for a quick look at the Hosting Team. I’m not a member of that team, but its forum is open and I’m curious what they’re up to.

The latest news is about an invitation they got to develop a TeaCuP of change management professionals inside a multinational corporation that has a forward-thinking VP of Strategic Capabilities. It’s heart-warming that they consider facilitating bottom-up transformation as a strategic capability.

I learn that that invitation came on the heels of two others we received last week. One was about developing a TCoP webinar for an international network of people working for societal innovation. The other was about exploring what such communities could do for two medium-size cities, one in Catalonia, and the other one in Russia.

Before learning about those possibilities, the TeaCuP movement’s potential impact that I could envision was kind of indirect. We educate ourselves by federating our inquiries and discoveries in peer-learning style, then going into deep-dive Learning Expeditions in the company of TIM, our good “friend,” the Teal Indicators Matrix.

We also learn Transformative Listening, Transparent Communication, Dialogue Interviewing, Chaordic Chat, and a number of other tools and processes that the Hosting Team has up in its sleeves and brings forth as needed.

All of those tools and processes contribute to our becoming better practitioners, more effective at midwifing evolutionary transformation in individuals and organizations, but the influence of our TeaCuP seemed to be only indirect, mediated through its members’ impact on their context.

Now, this might be changing if the structure and working practices of our community becomes replicable, and can directly support the evolution of organizations, cities, professions, and who knows what… Exciting times…

Over dinner, my son is asking whether he and his college friends can become members of our TeaCuP. I would love to say, yes, of course, but that’s not the case. Instead, I explain why this TeaCuP is not everybody’s cup of tea, so to speak: that it is invitational, and although everybody can apply for invitation, not everybody will be accepted. So I just tell him:

“There are some requirements that, as I know you, will not too difficult to meet. For example:

“Passion for becoming aware of where you are on your personal evolutionary journey and what is needed to consolidate the ground already claimed or prepare for the next plateau.

“Caring for and supporting that kind of awareness in other members of the community, and in the community as a whole.

“Making a commitment for an initial, 1-year long participation in monthly community calls, and online forums in between.

“Where you and your friends might or might not fit in the picture are the next two points:

“Facilitating profound transformation in a community or organization.

“Prototyping or planning to prototype a project, in your context, that supports societal innovation.

“You may ask why we make membership conditional on the last requirements. Well, because the zillions of crises in our world badly need people who are trained in the arts of facilitation and prototyping at that scale, and the fastest way they can develop themselves is in mutually supportive relationships of peer learning methods and tools that our community provides.

“I don’t know whether this makes sense to you, but it’s getting late. If you want to continue this convo, let’s do it over breakfast in the morning. Meanwhile, here is another clip where George is talking about some of these requirements.”

P.S. Although this story is fictitious, the launch of the first, invitational Transformative Community of Practice, September 2018, hosted by the CommunityIntelligence team, is not fictitious. To apply for an invitation, drop me a line at [email protected].

George Pór is an evolutionary thinker and a strategic learning partner to visionary leaders in business, government, and civil society. He is the originator of Enlivening Edge and teaches a course on “Transformative Communities of Practice” at Meridian University. A select list of his articles and book chapters on the fields of collective intelligence, organizational and social renewal can be found here.

Global Teal Meetup for the Americas: Belonging At Work