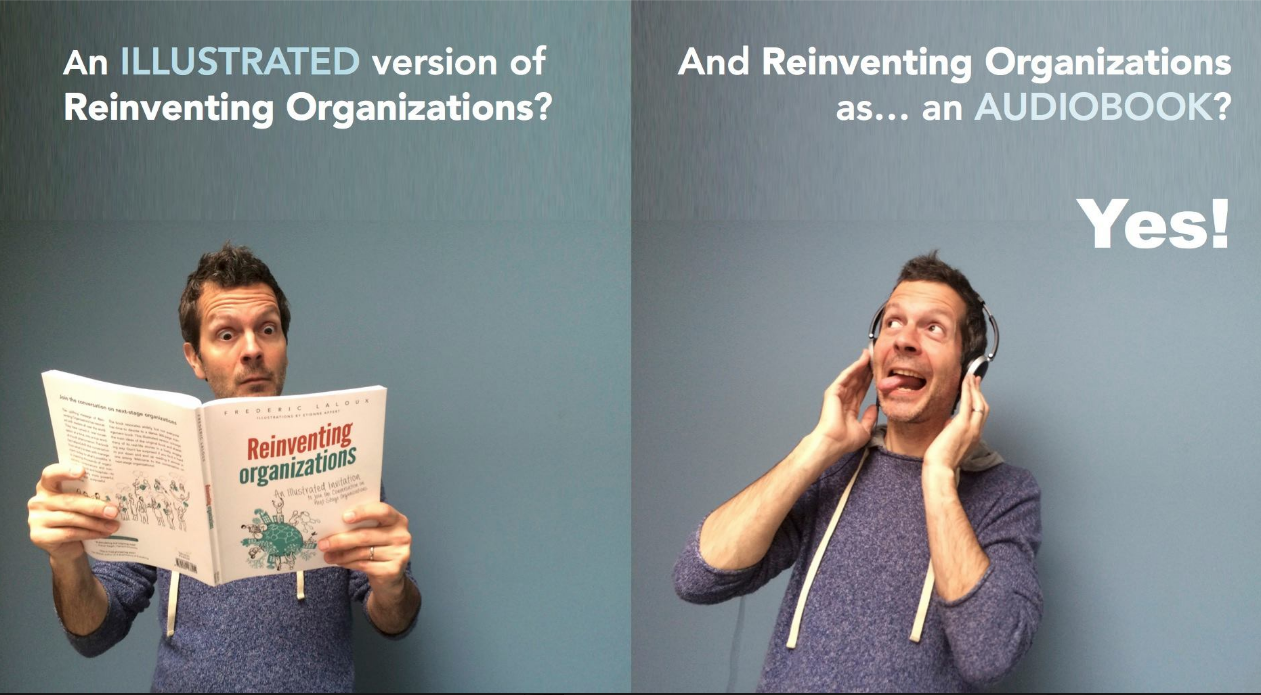 The Illustrated and Audiobook Versions of RO are Available!

1. THE ILLUSTRATED VERSION OF RO

For a year and half, I’ve been working with Etienne Appert, a very gifted illustrator, on an illustrated version of Reinventing Organizations. The purpose is to make the ideas of the book much more accessible – instead of almost 400 pages, the illustrated version cover all the important ideas in just 150. And, you’ve guessed it, it uses… illustrations that tell some of the stories and concepts in ways so powerful that much less text was needed. It’s a book you can read almost in one sitting and that really everyone (I think!) will enjoy reading.

From a creative perspective, it’s been a fascinating process. I’ve completely rewritten the book from cover to cover, always trying to go to the essence, to make things as easy to grasp and as memorable as possible. There was no template for what Etienne and I had in mind: it’s not a book with some added illustrations; and it’s not a comic book. It’s something else that I’m not sure has been attempted before. We’ve used text when text best makes the point, and images when images are more powerful.

And.. I think we’ve nailed it 🙂 But who am I to say? I’m really curious what you think of it. The first signs are encouraging. 500 people who helped crowd fund the book and provided feedback on early drafts received advanced copies in the last few days. Quite a few immediately wrote to ask when they could order multiple copies to share with friends and colleagues!

Reinventing Organizations has been recorded as an audiobook, and I’m very, very happy with the recording! It’s been a quite some time in the making, and the story of it is worth telling. One of the very first readers who contacted me when RO came out lives in upstate NY, close to a place where I was about to go on holidays. His name is Seamus Kennedy, and he and I soon met and became real buddies.

A year later he asks me: would you be OK if I recorded an audiobook from your work? Sure, I said! Have you done this before? No, never, he replied. At that point, I started to wonder if my encouragement was such a great idea 🙂

Well, it turns out Seamus is incredibly talented – he has the most wonderful voice, pace and diction. His recording is a real work of love, done over the course of many many evenings and weekends, next to his job running a natural health center that he and his colleagues were transforming into a Teal organization. A few months into the process, I was contacted by Audible/Amazon who asked to record the book, and I gently declined. I’m so glad Seamus did it – it’s been a much more personal and meaningful process, and the result, I’m sure, it’s much much better for it.

One reader, Morten Schmidt, volunteered to listen to the audiobook to catch possible mistakes. And this is what Morten wrote to Seamus in an email shortly after: “For a year and a half, I have crunched about an audiobook a week, and I have not once had this feeling of excitement. Some narrators are very professional and you can hear that they must have been professionally educated in this, but none of them have been able to create the same level of excitement in my end, that you have. This is fantastic.”

If this sounds like a crude sales pitch: I promise I’m not making this up 🙂But again, what counts is really what you make of it, and I hope you enjoy the audiobook as much as I and Morten do!

Today, as I write this, what’s present for me is how privileged I’ve been to work with people as gifted as Etienne and Seamus, and with whom working is so joyful and easy. The other things that’s present is the hope, with this all, that more and more people hear about the possibility to create whole new kinds of organizations (businesses, nonprofits, schools, hospitals…). To keep shifting the conversation from what broken today with organizations to what’s possible!

To listen to a sample or get the audiobook:www.reinventingorganizations.com/purchase.html#purchasearo

Comment from the EE editors: If you want to see our first reflections on the illustrated RO, and add yours, please visit and comment on this page.